Drama dominates Miami Dolphins on, off the field 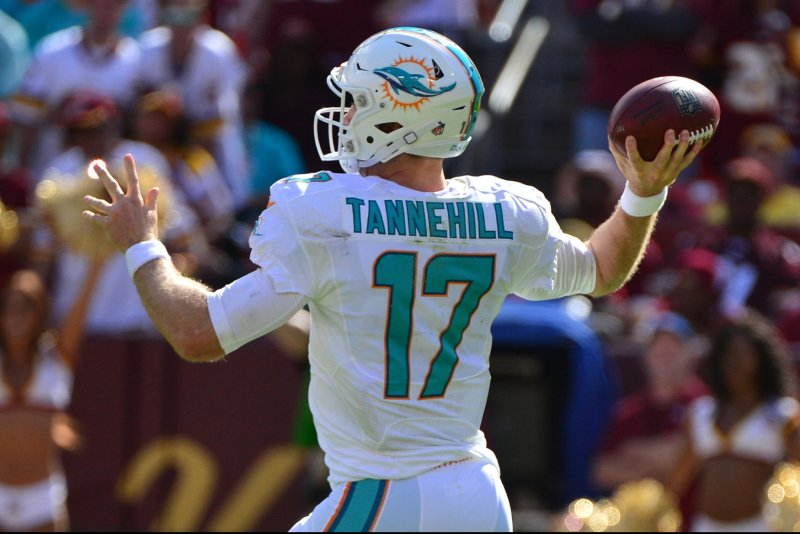 DAVIE, Fla. -- Miami Dolphins quarterback Ryan Tannehill inserted himself into the latest round of drama Wednesday by saying he thinks recent leaks from the locker room are "sickening."

But that wasn't the only unexpected event from the first day Dan Campbell conducted a practice as head coach.

Campbell, whose team is facing its bye week, said defensive coordinator Kevin Coyle is keeping his job for now. But asked whether he decided if Coyle would stay in the role the remainder of the season, Campbell said: "No, I haven't."

Campbell, who said he wanted to see his players "violently compete" during practice, oversaw an action-packed workout.

It included what one reporter described as "a round of nine 1-on-1 matchups involving offensive linemen, defensive linemen and linebackers. ... "

More seasoned reporters identified these as the infamous Oklahoma Drill, which is a no-nonsense 1-on-1 faceoff between blockers and tacklers, sometimes with a ball-carrier as a target.

While it is popular in college, previous attempts to use it in the NFL were not warmly accepted by veteran players.

"That whole deal down there was a fundamental practice," said Campbell, the former tight ends coach who spent 11 years in the NFL as a tight end. "It was just one-on-one. We had one little small section of seven-on-seven, which was actually football stuff.

"Everything else was all about being primates again. Every one of those guys. Just back to the days where, hey, you line up and you go."

In the first round of 1-on-1 drills, defensive end Olivier Vernon took three consecutive turns. He took on guard Billy Turner, then went against Pro Bowl center Mike Pouncey, and then Vernon shoved defensive end Derrick Shelby out of the way so he could face right tackle Ja'Wuan James.

When that was over, running back Damien Williams went 1-on-1 against safety Michael Thomas, and running back Lamar Miller went against practice squad safety Jonathan Dowling.

Everything, it seemed, was about competition Wednesday.

"Coach Philbin wanted a competitive atmosphere, too, but this was just different," Thomas said. "It just felt different out there. It was very competitive, and we liked it."

Players admitted they were surprised Philbin was fired four games into the season.

Pouncey, who signed a $52-million contract extension during the offseason said he was "shocked" Philbin was fired.

"The fourth game of the season, you really don't see that," he said. "Obviously at the end of the year if you let go of a coach, guys aren't really shocked by it because it's the end of the year, there's really nothing left for us to play for.

"But when you do it Week 4, a lot of guys are shocked. I love Coach Philbin. He's a guy that stuck with me through everything. He made me a better person."

Tannehill, who signed a $95-million contract extension in the offseason, was mad about a report that said he told defensive scout team players on Saturday to enjoy their practice squad paycheck.

"Yeah I'm upset," he said. "Honestly, it's slanderous to report things that, first of all, I didn't say. To put words into my mouth that I didn't say, to degrade my reputation and what I stand for, honestly it's sickening to me.

"On top of that, just the fact that something from inside the locker room gets out obviously upsets me as well."

Tannehill then told his side of the story.

"It was the day before the game," Tannehill said. "I didn't feel like we were getting the looks that we needed the day before a game and I got upset. I said nothing about a paycheck or anything close to that. I know everyone in this building works hard every single day. I respect that and I would never take a shot like that.

"Am I happy about everything I said? No. The way things went down the way they did? No. But I hold myself to a higher standard than to take a shot at something like that, especially to the guys that I work with every day and respect how they go about their business."

Tannehill admitted he made a remark about "a scout team or trophy" because the scout team was making defensive plays on a day in which the offense is simply trying to polish the game plan.

"I did get upset and said those things," he said of the scout team/trophy remarks, "but I talked to those guys and cleared the air with them and we're moving forward."

The Dolphins, who are on a three-game losing streak as they enter their bye week, are attempting to do the same.

Overall, players seemed excited about all the changes, especially the more physical practice.

"Dan, he's a player, so he knows how it is," Vernon said. "He played in the league for a while. Not taking anything away from Philbin, but Dan, especially being in the new role as a head coach and taking over, right now he's just doing what he's got to go to get us ready."