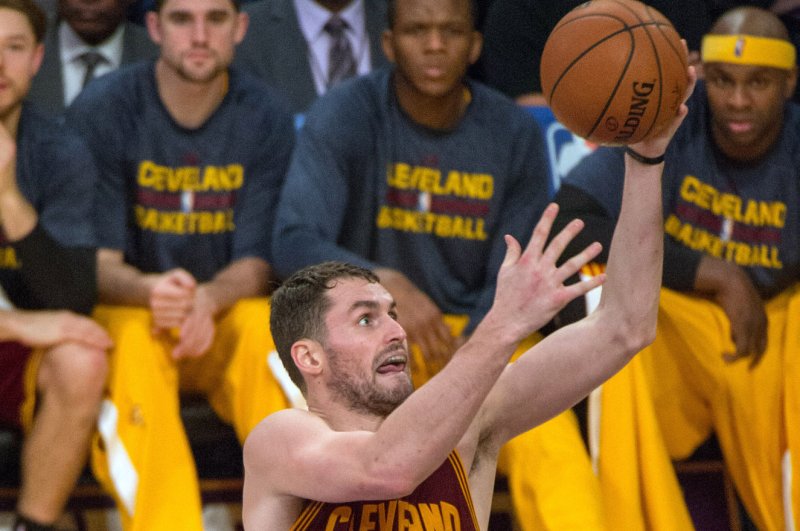 Kevin Love had arguably his best game in a Cavaliers uniform on Sunday, scoring a season-high 32 points as Cleveland got back in the win column with a 120-105 drubbing of the Los Angeles Lakers.

The Cavs had their 12-game winning streak snapped by the Pacers on Friday but were locked in from start-to-finish in this one, as they shot 55 percent from the field and connected on 18 3-pointers in the rout.

Love, who scored just five points in two of his previous three games, shot 7- of-8 from the perimeter and pulled down 10 rebounds to match double-doubles recorded by LeBron James and Kyrie Irving. James totaled 22 points, 10 boards and eight assists, while Irving scored 28 points and handed out 10 assists in Cleveland's ninth straight home win.

Jordan Clarkson led the Lakers with a career-high 20 points but it was not nearly enough to salvage a winless four-game road trip. LA shots 41 percent from the floor and gave up 22 fastbreak points.

There were 12 lead changes in a tight first quarter that ended with the Cavs holding a slim 32-28 lead, but the rest of the game was one-sided.

Love scored 17 points in a second quarter that saw Cleveland begin pulling away despite James only taking one shot -- a halfcourt heave at the buzzer that he nearly banked in.

That's about all that went the Lakers' way. Iman Shumpert added nine points in the second, including two on an alley-oop dunk over Carlos Boozer off a sideline inbounds pass. A 20-2 run late in the quarter, fueled by four consecutive Love 3-pointers, gave the Cavs a commanding 64-43 lead.

James got going early in the third as he scored on four straight possessions, and two more 3s from Love in the final minute sent the hosts into the fourth with a healthy 96-79 cushion.

James, Irving and Love watched the final 10 minutes from the bench.

The Cavs are unbeaten in their last nine games against Western Conference teams ... LA has lost 13 of its last 14 games overall and is winless in the past 10 on the road ... Shumpert scored 12 points ... Ed Davis netted 16 points for the Lakers, who lost both meetings against the Cavs this season.