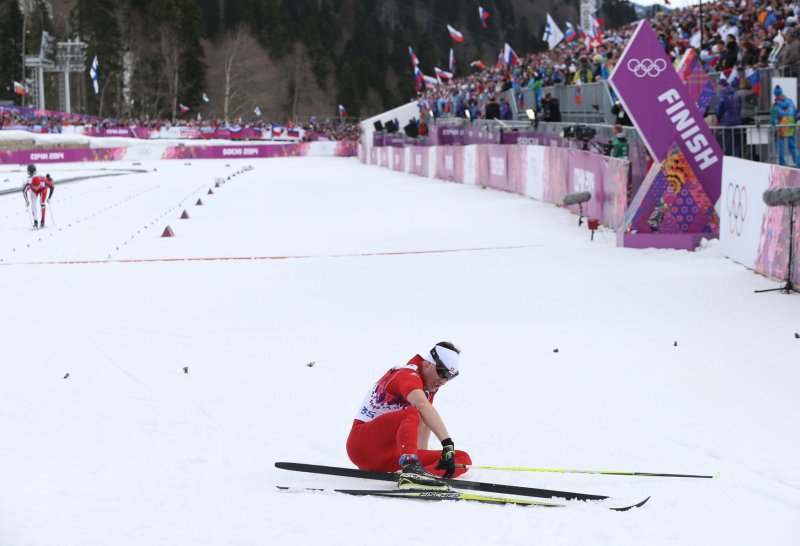 SOCHI, Russia, Feb. 14 (UPI) -- Competitors from Switzerland and Belarus stayed quite warm at the Winter Olympics Friday, as did just about everybody else who went outdoors.

The Winter Olympics, being contested in and around what is actually a summer resort, were again infected by a touch of spring as the Games neared the midway point. That led to soft snow in the mountains and even had an affect on wardrobes.

When the winner of a cross-country skiing race comes to the finish line wearing short sleeves, it is a signal that something is very different at these Olympics.

In addition to warmth, the Olympics demonstrated a competitive nature Friday with Britain and Japan both recording their first victories of the Games. Croatia and Kazakhstan also won their first medals, bringing to 26 the number of nations with at least one to equal the total from Vancouver four years ago.

At the start of day five countries had won at least four golds and those nations combined to produce a total of just two medals on Friday .

One of those went to the United States, represented by Noelle Pinkus-Pace and her touching story of persistence.

Pinkus-Pace won silver in the skeleton event, giving the Americans 13 medals and moving the United States into a tie with Norway for most overall.

The day, however, belonged to Switzerland and Belarus.

Both those countries won two gold medals and three overall. Together they claimed a third of all the medals awarded on Friday.

Sandro Viletta brought the Swiss one of their golds with a stunning victory in the men's alpine combined. He ranks only 49th this year on the World Cup circuit's overall standings.

Dario Cologna then brought Switzerland another victory in the 15-kilometer cross-country race. It was his second gold of these Games and he provided the unusual sight for a Winter Olympics by skiing with his arms bare.

The gold medals for Belarus came from biathlete Darya Domracheva in a 15-kilometer test and from Alla Tsuper, who pulled off a completely unexpected win in freestyle skiing aerials.

The four victories for Switzerland and Belarus came in the mountain venues where the mercury rose to levels not usually seen at altitude in the Winter Olympics.

Race officials measured a temperature of 55 degrees at the finish of the slalom course in the alpine combined, it was 51 at the biathlon course and 50 when the cross-country skiers competed. Even after the sun went down, it was a pleasant 44 degrees as the women went through their aerial routines.

At the skiing sites, the snow conditions were officially listed as "soft," which made it all the more tiring for the athletes to plow through.

The first gold of the games for Japan and Britain came in men's figure skating and the women's skeleton.

Yuzuru Hanyu became the first Japanese male ever to win an Olympic figure skating gold medal. At age 19, he emerged as the champion after Russian Yevgeny Plushenko, a dozen years Hanyu's senior, had withdrawn on Thursday with back problems.

The skeleton winner was Britain's Elizabeth Yarnold, whose four-run combined time was almost a second faster than the runner-up.

It was the silver medalist, however, who stole the show.

Pikus-Pace has been riding sleds down the ice for a decade and she had hoped to win a medal at the 2006 Olympics in Turin. A few months before those Games, however, she was involved in a freak accident in which she was struck by a bobsled and the fractured leg she suffered put her on the sidelines.

She made it to Vancouver in a bid to make up for that disappointment and she finished one spot out of the medals. Having started a family, Pikus-Pace had enough and she retired.

Eventually, however, she decided to give it one more shot and even though she has had her own back issues that have limited her training, she came through with four solid runs to win the silver medal.

As soon as her sled stopped Friday, she jumped out of it and climbed into the grandstands to hug her husband and children.

In the men's hockey tournament, Canada and Finland posted one-sided wins to set up a showdown to determine the winner of Group B.

Jeff Carter of the Los Angeles Kings had a hat trick in Canada's 6-0 win over Austria while Finland scored three first-period goals to defeat Norway 6-1.

Sweden took control of Group C with a 1-0 victory over Switzerland that left the Swedes as the only unbeaten team in the group.

NFL // 15 hours ago
'Unwanted' QB Sam Darnold stung by trade, vies to improve with Panthers
April 13 (UPI) -- Quarterback Sam Darnold said he was "stung" when he became "unwanted" and traded away by the New York Jets this off-season to the Carolina Panthers, but is now focused on self-improvement and learning a new offense.