Blake's first goal came on an unassisted rush into the Canucks zone. The Ducks winger fired a shot that beat Roberto Luongo to the far post and handed Anaheim the lead for good at 2-1.

Blake also tallied on a third-period power play and assisted on Nick Bonino's marker as the resurgent Ducks logged their fifth win in six games.

Bobby Ryan added a goal and a helper and Jonas Hiller turned aside 21-of-23 shots for Anaheim.

Cody Hodgson and Mason Raymond found the net for the Canucks. 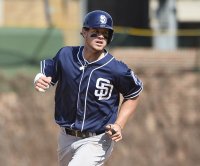 MLB // 14 hours ago
Padres' Wil Myers hits ball twice on one swing for RBI single
April 13 (UPI) -- Veteran outfielder Wil Myers swung once, but hit the baseball twice to connect for an RBI single during a San Diego Padres win over the Pittsburgh Pirates. 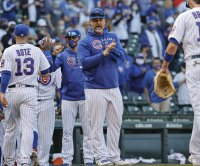