Trahan shot a 7-under 65 to overtake Justin Leonard, who ended up in second place three strokes back.

"I knew I was going to have to go out and play some good golf," Trahan said. "A 65 was a good round. It was able to get the job done for me. I'm very happy."

Leonard, who led entering the final round, slipped to an even-par 72 and a total of 23-under 337.

Trahan had previously won the Southern Farm Bureau Classic in 2006.

MLB // 57 minutes ago
Braves' Charlie Morton fractures fibula in Game 1, out for rest of World Series
Oct. 26 (UPI) -- Atlanta Braves starting pitcher Charlie Morton will be out for the remainder of the World Series after suffering a fractured right fibula early in Game 1 on Tuesday night at Minute Maid Park in Houston.

NFL // 3 hours ago
Steelers' Mike Tomlin halts USC, LSU coaching rumors: 'That's a joke to me'
Oct. 26 (UPI) -- Pittsburgh Steelers head coach Mike Tomlin on Tuesday shut down speculation that he could be in the running to fill head-coaching vacancies at USC or LSU.

NFL // 12 hours ago
Longtime NFL official Carl Madsen dies after working Chiefs-Titans game
Oct. 26 (UPI) -- Carl Madsen, who worked as an NFL official for more than two decades, died on his way home from working a Week 7 matchup between the Kansas City Chiefs and Tennessee Titans in Nashville, the NFL announced. He was 71. 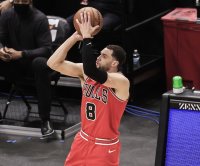