A Cincinnati television station aired a report about the meeting Monday night. Major League Baseball declined to address the meeting, which also has been reported by ESPN.com and MLB.com.

"There have been a number of stories alleging conversations and meetings between Commissioner Selig and Pete Rose," said Bob DuPuy, President and Chief Operating Officer of MLB. "Pete Rose applied for reinstatement to Commissioner Selig several years ago. The application has been pending since that time. Given the pendency of that application, neither the Commissioner nor anyone else in our office will comment on the Pete Rose matter."

WXIX-TV reported that Rose and former Philadelphia Phillies teammate Mike Schmidt met with Selig to discuss a deal. The report said that Rose would have to undergo a 12-month probationary period before further action could be taken.

"There are a lot bigger people I'm obligated to answer to first," Rose told WXIX through a personal friend, "so my official comment is 'no comment.' "

Rose agreed to a lifetime ban from baseball in August 1989, following an investigation into his gambling. Since then, his bids for reinstatement, official and otherwise, have been unsuccessful.

In recent years, Rose has garnered some public sentiment. He received the loudest ovation of the evening before Game 2 of the 1999 World Series, when the All-Century Team was introduced in Atlanta.

An announcement at Baylor is scheduled for Wednesday.

The Houston Chronicle reported Monday night that Morriss, 51, met with the Kentucky players Monday afternoon after accepting the Baylor position, and there was an announcement by the school saying that Morriss, a Texas native, stepped down to accept a job at another school.

It did not specify the institution.

The Lexington Herald-Leader reported Tuesday that Morriss and his wife, Jackie, returned home from Waco Monday night to a scene of television cameras and reporters surrounding their house. Police officers were on hand to monitor the situation.

Morriss immediately pulled into his garage, and did not answer questions concerning the Baylor job.

Kentucky officials made a statement about Morriss shortly thereafter.

"I'm very appreciative of the contributions of Coach Morriss, his staff, and his family in laying the foundation for the rebuilding of Kentucky football," said Wildcats Athletic Director Mitch Barnhart. "We wish them the best as they take the next step in their lives and careers."

Morriss would become the second coach in less than a week to leave an SEC school for the Big 12 in Texas. On Friday, Dennis Franchione left Alabama to fill the vacancy at Texas A&M.

Morriss, an assistant at Kentucky from 1997-2000, took over for Hal Mumme in 2001 and posted a two-year record of 9-14. After going 2-9 last year, the Wildcats were 7-5 this season, but were not bowl eligible because of NCAA probation.

At Baylor, Morriss would replace Kevin Steele, and have an even bigger rebuilding task on his hands. The Bears barely have been competitive in the Big 12 as Steele posted a four-year record of 4-32, winning just one conference game.

The Herald-Leader said Morriss' current contract pays him $400,000 annually, and reports out of Waco indicate he will make at least double that by accepting the Baylor job.

Ramsey to start for Redskins

Coach Steve Spurrier made the announcement late Monday, when it was revealed that Danny Wuerffel will be out at least a week because of a shoulder injury.

Wuerffel was injured in Sunday's 27-21 loss to the New York Giants, which eliminated the 'Skins from the postseason.

Ramsey replaced Wuerffel and completed 12-of-27 passes for 204 yards, with one touchdown and no interceptions. He led the Redskins on two second-half touchdown drives, and had them driving for another score late in the game. An untimely fumble by wide receiver Darnerien McCants, one of five Washington turnovers, thwarted that effort.

"Patrick made a lot of good plays," Spurrier said. "He bounced around the pocket, bought some time to throw. He made some nice throws. Hopefully he can carry on and improve as we go."

Spurrier wanted to limit his expectations for Ramsey.

"He's just a rookie," Spurrier said. "He needs a full offseason of work to really get himself ready to play. It's unrealistic to think a true rookie could come in and play quarterback. He's got a lot of potential. We have a lot of faith and belief that Patrick has a great chance to be our quarterback."

For the season, Ramsey is 63-of-130 for 927 yards, with four touchdowns and six interceptions. He was Washington's No. 1 draft pick out of Tulane in the 2002 draft.

Hall of Famers to be inductees Tuesday

The induction ceremonies will take place as part of the 45th annual awards dinner held by the National Football Foundation. The actual enshrinement will take place in August at the College Football Hall of Fame in South Bend, Ind.

In addition to the 13 players, Earle Bruce and Carmen Cozza will be inducted as coaches.

White played defensive tackle at Tennessee from 1980-83, and was a unanimous All-America selection in his senior season, when he also was a Lombardi Award finalist.

After playing one season in the USFL, White was selected in the first round of the 1985 draft by the Philadelphia Eagles. He is the NFL's all-time leader with 198 sacks, and was a member of the Super Bowl XXXI champion Green Bay Packers.

Marino, one of a long line of great quarterbacks from western Pennsylvania, was a four-year starter at Pittsburgh from 1979-82. He guided the Panthers to a 42-6 record, including three straight bowl game victories.

Lott, a safety at Southern California from 1977-80, was a member of the 1978 national championship team, and a unanimous All-America pick in his senior season.

One of the hardest hitting defensive backs in NFL history, Lott was a two-time All-Pac-10 selection before winning four Super Bowl rings with the San Francisco 49ers. He also played with the Los Angeles Raiders and New York Jets during a 15-year NFL career, and was inducted to the Pro Football Hall of Fame in 2000.

Kellen Winslow, also a member of the Pro Football Hall of Fame, is the only tight end selected this year. He played at Missouri from 1976-78, totaling 71 receptions, 1,089 yards, and 10 touchdowns.

Winslow was a consensus All-American in 1978, and went on to a nine-year career with the San Diego Chargers. His son, Kellen Winslow Jr., is a tight end for top-ranked Miami.

To be eligible for the College Football Hall of Fame, a player needs to have received major first team All-America recognition and be 10 years removed from his last collegiate season.

Players must prove themselves as "worthy citizens," and only those who have played within the last 50 years are considered. Coaches with a minimum .600 winning percentage, 10 years, and 100 games are eligible three after retiring.

Hingis still has not fully recovered from an ankle injury. The three-time winner of the annual first match of the Grand Slam took an indefinite break from tennis in October after failing to win a tournament following surgery on her left ankle in May.

She missed the French Open and Wimbledon before returning in mid-August at the Canadian Open, where she reached the quarterfinals, and added another quarterfinal showing at New Haven before losing in the fourth round at the U.S. Open.

In October, the Switzerland native admitted she probably came back too soon after surgery, and decided to take a break for an indefinite period.

Hingis, 22, won the last of her five Grand Slam titles at the Australian Open in 1999, and reached her sixth straight final at Melbourne Park last January.

Hingis won three of her five majors in a dominant 1997 season when she came within a loss to Iva Majoli in the championship match of the French Open of a Grand Slam, winning all four majors within a calendar year.

Hingis, a slightly-built player who used tennis savvy to claim 40 career singles crowns has increasingly found it difficult to win now against the big power players who rule the WTA Tour.

She held the No. 1 singles ranking for 209 non-consecutive weeks, fourth on the all-time list, and has the distinction of being the youngest ever to hold the top spot. She also became the fourth woman ever to achieve a doubles Grand Slam.

Lewis was suspended for shoving his fist in the face of Miami Heat guard Travis Best with 6:24 remaining in Seattle's 100-71 win. The players had a shoving match prior to the incident.

Ostertag was fined for failing to leave the court and head to the locker room in a timely manner two minutes into Sunday's 110-101 road loss to the Los Angeles Lakers.

Ostertag, upset with a non-call against Lakers center Shaquille O'Neal, argued and was hit with two technical fouls, prompting his ejection.

He moved toward the referee and had to be restrained by teammates Matt Harpring and John Stockton. Upon exiting, he kicked over a pile of towels, and yanked down the canvas above the runway.

According to Coach Jim Larranaga, the 6-10 Young, the team's leading rebounder at 7.0 per contest and second-leading scorer at 12.5 points, was suspended for an unspecified violation of team rules. Larranaga said he will be suspended for at least the next two games.

"His status with the team will be re-evaluated during the next few weeks," Larranaga said.

The suspension covers contests against East Carolina on Dec. 19, and Hartford on Dec. 23.

Young, a senior from Peterborough, Ontario, started the first six games for the Patriots (3-3), and either led or tied for the team scoring lead in the last three contests. He scored a season-high 23 points in a 79-72 victory over Duquesne on Dec. 2, and tied or led the team in rebounding in five of six contests, including a season-high 13 in George Mason's 56-49 loss Mississippi. 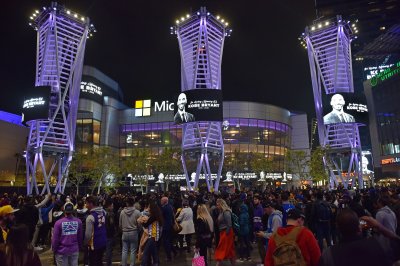