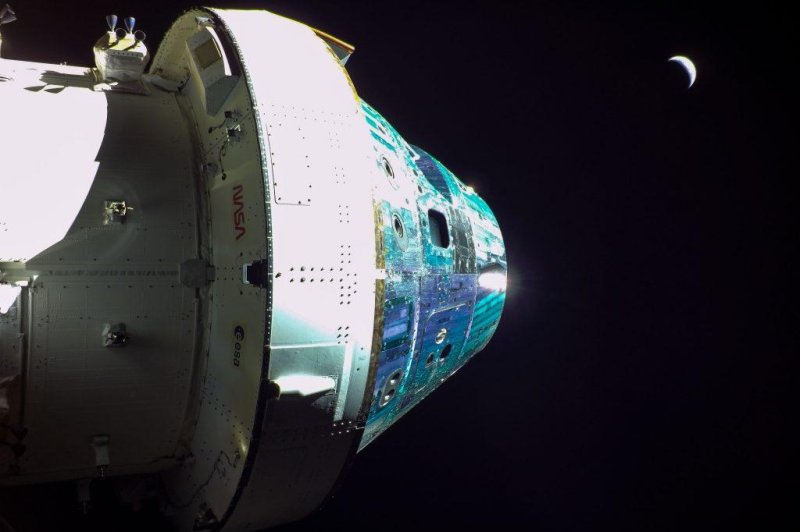 NASA's Orion capsule is pictured on Day 19 of the Artemis I mission in a picture taken from a camera mounted on one of its solar arrays as the spacecraft prepares for the return powered flyby of the moon on Monday, when it will pass about 79 miles above the lunar surface. Photo courtesy of NASA

Dec. 5 (UPI) -- NASA's Orion spacecraft has completed a close flyby of the moon on Day 20 of the Artemis I mission as the capsule prepares to return to Earth.

The return powered flyby burn began around 11:43 a.m. EST and was livestreamed by NASA.

NASA confirmed that the maneuver was completed succesfully around 12:16 p.m. when mission control in Houston regained communication with the Orion spacecraft after passing behind the far side of the moon.

"For Orion, this is not a goodbye, but a see-ya-later to the moon, our nearest celestial neighbor," Sandra Jones with NASA Communications said during the broadcast.

The maneuver marked the closest approach of the Orion spacecraft to the moon to date, flying 79.2 miles above the lunar surface, and was the last major burn of the mission.

The burn lasted about 3 minutes and 27 seconds and the spacecraft temporarily lost communication with Earth for about 31 minutes as it flew behind the dark side of the moon.

"We have retrieved signal with [Orion] after an expected loss of signal when the spacecraft flew directly behind the moon," NASA said on Twitter with a video showing Earth in the distance.

Officials with NASA are scheduled to discuss the results of the burn around 5 p.m. EST, which will also be streamed live. NASA leaders will also discuss the deployment of recovery assets to sea ahead of Orion's splashdown on Sunday.

Last Thursday, the Orion capsule successfully completed a burn to take it out of distant retrograde orbit that lasted for 1 minute and 45 seconds.

The procedure involved firing engines on the European service module, which committed the spacecraft to leaving the lunar orbit.

Orion had been in distant retrograde orbit -- an elliptical orbit around the moon that is unique to Artemis 1 to test its various systems.

The capsule had performed two other burns previously to prepare it for the distant retrograde orbit --taking it from 81 miles above the lunar surface on Nov. 21 to a lunar altitude of 40,000 miles.

The mission, which launched from Kennedy Space Center on Nov. 16, sets the stage for astronauts to return to the moon for the first time since 1972, which will occur sometime in 2025 or 2026.

The Space Launch System (SLS) rocket carrying an Orion spacecraft lifts off on the maiden flight of NASA's Artemis Program from Complex 39-B at the Kennedy Space Center on November 16, 2022. Photo by Joe Marino/UPI | License Photo
Advertisement

Science News // 23 hours ago
Rise in air pollution correlates to creation of impressionist painting, study says
Feb. 4 (UPI) -- Smoggy air during the Industrial Revolution contributed to the creation of impressionism, inspiring painters such as J.M.W. Turner and Claude Monet to develop new painting styles, according to a new study.

Science News // 2 days ago
Early COVID-19 variants remain in deer populations
While COVID-19 variants Alpha, Gamma and Delta are no longer circulating among humans, they continue to spread in white-tailed deer.

Science News // 3 days ago
NASA names first person of Hispanic heritage as chief astronaut
Feb. 2 (UPI) -- Veteran astronaut Joe Acaba made history on Thursday when he was named chief of the Astronaut Office at NASA's Johnson Space Center in Houston.

Science News // 3 days ago
Astronauts use spacewalk to continue upgrade of ISS solar arrays
Feb. 2 (UPI) -- Astronauts from NASA and Japan Aerospace Exploration Agency stepped out from the International Station to begin a spacewalk early Thursday to complete work started by another work team almost two weeks ago.

Science News // 5 days ago
Study suggests dolphins in Brazil are training humans to fish
Jan. 31 (UPI) -- Bottlenose dolphins that have herded mullet for fishermen in southeastern Brazil for more than a century are now helping scientists unlock the deeper mystery behind the collaboration between animals and humans.

Science News // 5 days ago
Comet, full moons, Mars: February brings must-see astronomy
February's fickle weather can pose a challenge to stargazers. But when the night sky is devoid of clouds, it will offer the opportunity to witness several eye-grabbing astronomical events.

Science News // 6 days ago
Parasites, pesticides, climate change linked to loss of honey bee colonies
Jan. 30 (UPI) -- About 43% of honey bee colonies were lost in the span of one year, according to a new study that considered multiple factors that put a crucial part of the ecosystem at risk.