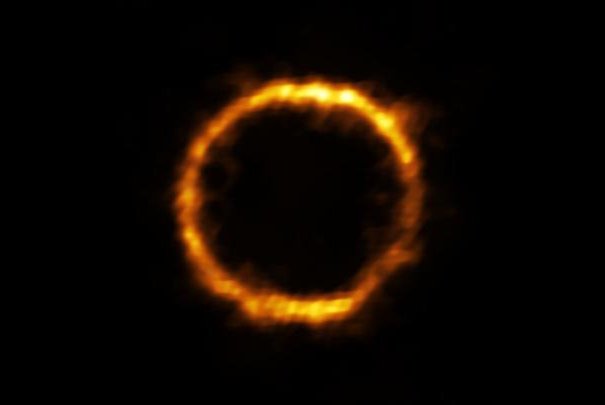 Astronomers used the European Southern Observatory's ALMA telescope to observe a Milky Way-like galaxy in the early universe, the most distant to be imaged to date. Photo by ALMA (ESO/NAOJ/NRAO), Rizzo et al.

Aug. 12 (UPI) -- Astronomers have discovered a Milky Way lookalike 12 billion light-years from Earth -- the most distant Milky Way-like galaxy ever observed -- according to a study published Wednesday in the journal Nature.

When scientists study light from so far away, they're seeing something that is 12 billion years old, revealing the universe as it was just 1.4 billion years after the Big Bang.

Finding such a stable, intact galaxy was a surprise, astronomers said.

"Galaxies in the early universe are expected to be the site of powerful phenomena like supernova explosions, which release a lot of energy into the system," study co-author Simona Vegetti told UPI.

While most theories of cosmic evolution depict the early universe as a place of turbulence and chaos, the gas found in the newly discovered galaxy -- called SPT0418-47 -- appears quite uniform.

"It is quietly rotating around the center of the galaxy," said Vegetti, a researcher at the Max Planck Institute for Astrophysics in Germany. "It is very hard to explain this behavior within the context of the latest state-of-the-art numerical simulations of galaxies."

The Atacama Large Millimeter/submillimeter Array, or ALMA -- located in Chile, it is the largest telescope in the world -- was able to image the distant galaxy and its smoothly flowing gas thanks to a phenomenon known as gravitational lensing.

When the gravity of a closer galaxy bends the light of a more distant galaxy, a magnifying lens-like effect enhances the faraway light. The phenomenon often is used to study galaxies that otherwise would be too far away to see.

Because the lensing effect both magnified and distorted the light of SPT0418-47, researchers had to use computer models to realistically depict the galaxy and the movement of its gas. The analysis revealed the newly found galaxy to be similar to the Milky Way.

Appearing circular with a central bulge is where the two galaxies' similarities end, however, as the new galaxy is smaller and doesn't have spiral arms, Vegetti said.

"We say that this galaxy is Milky Way-like essentially because it has a regularly rotating disc. Thus, it looks like a so-called 'disc galaxy' in the nearby universe," study co-author Filippo Fraternali told UPI.

Though smaller, the universe looks to be quite mature. Most models of early galaxy evolution suggest it should take longer for galaxies to form stable flows and central bulges.

"A possible interpretation of our results is that both gas discs and bulges form much more rapidly than was thought previously," said Fraternali, a researcher with the Kapteyn Astronomical Institute at the University of Groningen in the Netherlands.

Researchers now are trying to determine how common galaxies like SPT0418-47 are in the distant, or early, universe.

"Then, we are looking forward to the next generation of telescopes currently being built," Vegetti said. "These new facilities will bring this type of analysis to the next level, allowing us to observe even younger galaxies with an even greater level of detail."