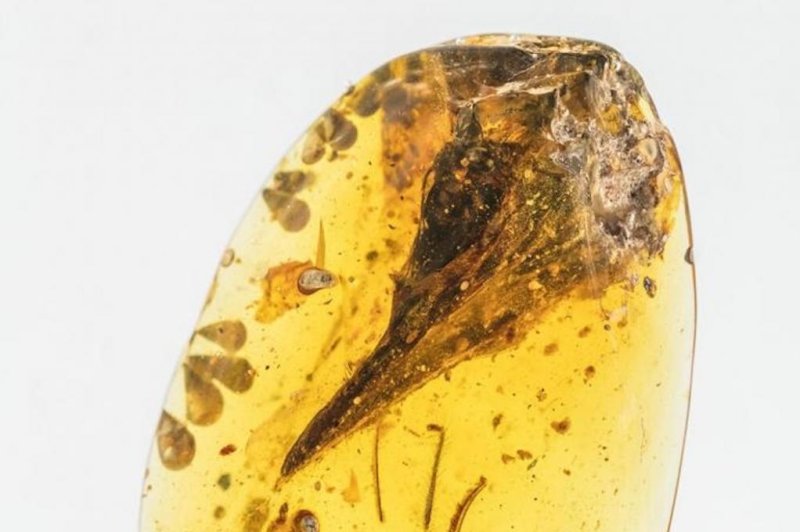 Aug. 3 (UPI) -- New research suggests an ancient skull found inside 99-million-year-old amber belonged to a lizard, not the "world's smallest dinosaur," as scientists claimed earlier this year. Lizards and snakes form a group of reptiles that distinct from dinosaurs.

In light of the new evidence, the original Nature article has been retracted.

Originally, scientists in China and the United States claimed the ancient piece of Myanmar amber featured the remains a tiny, hummingbird-like dinosaur, which they named Oculudentavis khaungraae.

"Amber preservation of vertebrates is rare, and this provides us a window into the world of dinosaurs at the lowest end of the body-size spectrum," Lars Schmitz, associate professor of biology at Claremont McKenna College in California, said in March. "Its unique anatomical features point to one of the smallest and most ancient birds ever found."

But according to Nature, their work garnered criticism almost immediately, with several paleobiologists claiming the researchers had found a lizard, not a dinosaur. At first, the authors of the original study defended their work, but eventually critics produced a nearly identify fossil that the team had classified as a lizard.

The evidence forced the authors of the original paper to acknowledge their mistake. In a retraction note published in Nature, the scientists said their description of the fossil remained accurate, but admitted that they had likely misclassified the specimen.

Co-author of the original paper, Jingmai O'Connor, a palaeontologist at the Chinese Academy of Sciences Institute of Vertebrate Paleontology and Paleoanthropology in Beijing, told Nature that the latest data "do definitively say that we were wrong."

The evidence that convinced Schmitz, O'Connor and their colleagues to retract their claims has been published on the internet, but it has not yet been peer-reviewed and published in a scientific journal. O'Connor told Nature that until it is, Oculudentavis khaungraae can't be officially reclassified.