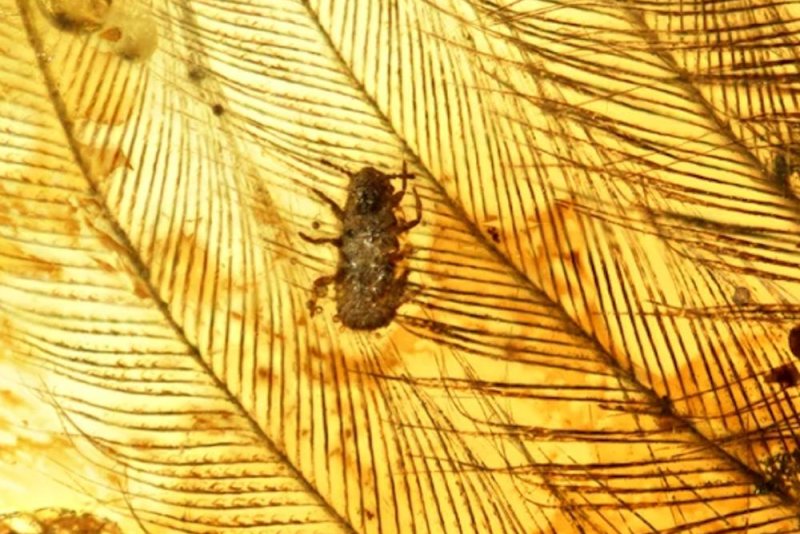 Scientists described the discovery this week in the journal Nature Communications.

"The preservation in amber is extremely good, so good it's almost like live insects," study co-author Chungkun Shih, a paleoentomologist at Capital Normal University in Beijing, told the Smithsonian Magazine.

Inside two pieces of Burmese amber, scientists found 10 insects on feathers that looked like they had been damaged, as if they'd been eaten.

Researchers have previously found evidence that dinosaurs were plagued by blood-sucking ticks, fleas and other parasites, but the latest discovery pushes back the earliest appearance of lice by 55 million years.

Shih and his colleagues named the new lice-like species Mesophthirus engeli. Scientists were surprised to find the lice were significant smaller than their modern relatives.

"Based on our studies of fossil fleas, we thought that if we were looking for lice, the size may be bigger than today's lice, but [they] turned out to be very small," Shih told the Guardian. "That can explain why on compression fossils [in rocks] we cannot find any lice."

Their small size likely explains why they've taken so long to be discovered.

"It is very rare and difficult to find these earliest louse-like insects in amber," Shih told Gizmodo.

According to researchers, the parasite's mid-Cretaceous appearance in the fossil record makes sense. It was around the middle of the Cretaceous that birds and feathered dinosaurs began diversifying in haste.

RELATED Bedbugs survived the impact event that wiped out the dinosaurs

By studying the relationships between ancient parasites and their hosts, scientists can gain new insights into the ways modern pests evolved.

"In human history you can see that the flea caused the black plague, and even today we are affected by blood sucking or chewing parasites," Shih told the Smithsonian magazine.

Adaptations inspired by cultural change common in the animal kingdom

Science News // 1 hour ago
Scientists believe second asteroid may have contributed to dinosaur extinction
Aug. 18 (UPI) -- Scientists now believe more than one asteroid could have impacted Earth, contributing to the extinction of dinosaurs, according to new research.

Science News // 7 hours ago
'Cannibal' solar burst headed for Earth could make northern lights visible in U.S.
Aug. 18 (UPI) -- A plume of "dark plasma" from the sun is expected to be overtaken by a "cannibal" solar burst that may cause an aurora display visible throughout large portions of the United States on Thursday.

Science News // 20 hours ago
Spacewalk cut short by equipment failure
Aug. 17 (UPI) -- A Russian astronaut's spacewalk outside the International Space Station was cut short Wednesday after experiencing an electrical problem with his suit.

Science News // 1 day ago
Northern lights could glow over northern U.S.
Wednesday night will feature the rare opportunity to see the glow of the aurora from the United States, but cloudy conditions could obscure the sky during the height of the celestial light show.

Science News // 1 day ago
National Academy of Sciences sanctions White House climate official for ethics violation
Aug. 17 (UPI) -- The U.S. National Academy of Sciences has sanctioned White House official Jane Lubchenco, and barred her from working on publications or programs for the academy for five years, for violating its ethical code of conduct.