"What we've found is that horses can not only read human facial expressions but they can also remember a person's previous emotional state," said researcher Karen McComb.

Horses were more wary of people they previously saw in a photo with an angry expression on their face. Photo by University of Portsmouth/University of Sussex

April 26 (UPI) -- Horses recognize human faces and their emotional expressions, using the information to assess whether a person is a threat or not.

In a series of experiments, researchers at the universities of Sussex and Portsmouth showed domestic horses photographs of humans with either a happy or angry expression on their faces. Later, the horses were introduced to the people they saw in the photographs, this time with neutral expressions.

Researchers watched the eye movements of horses as they met the photograph subjects in real life. The horses perceived those who had been photographed with an angry face as more threatening.

Previous research showed horses tend to focus on negative or threatening objects and events with their left eye, as the right hemisphere of their brain is tasked with assessing risk. In the new experiment, researchers found horses stared at subjects who had been photographed with an angry expression using their left eye.

"What we've found is that horses can not only read human facial expressions but they can also remember a person's previous emotional state when they meet them later that day -- and, crucially, that they adapt their behaviour accordingly," Karen McComb, a professor at the University of Sussex, said in a news release. "Essentially horses have a memory for emotion."

Scientists have previously shown horses can recognize expressions, but the latest findings, published this week in the journal Current Biology, are the first to show the mammals can recall an expression linked with an individual's face.

"We know that horses are socially intelligent animals, but this is the first time any mammal has been shown to have this particular ability," Portsmouth researcher Leanne Proops said. "What's very striking is that this happened after just briefly viewing a photograph of the person with a particular emotional expression -- they did not have a strongly positive or negative experience with the person."

Science News // 9 hours ago
NASA to announce fate of tremor-detecting InSight Mars lander
ORLANDO, Fla., May 17 (UPI) -- Despite being ravaged by dust storms and struggling to stay powered, NASA's InSight Mars lander has managed to keep making scientific findings -- including its recent detection of a powerful Marsquake.

Science News // 21 hours ago
Scientists find evidence of water in Mars rock, but no signs of life
May 16 (UPI) -- Swedish scientists say a study of a meteorite from Mars indicates that it had only very limited exposure to liquid water -- an indication that it's unlikely life was present on the Red Planet in recent times. 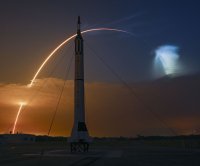