"The fact that one of the earliest pieces of iron from Africa was found in association with the horse reiterates how special it was to the people," researcher Sarah Schrader said. 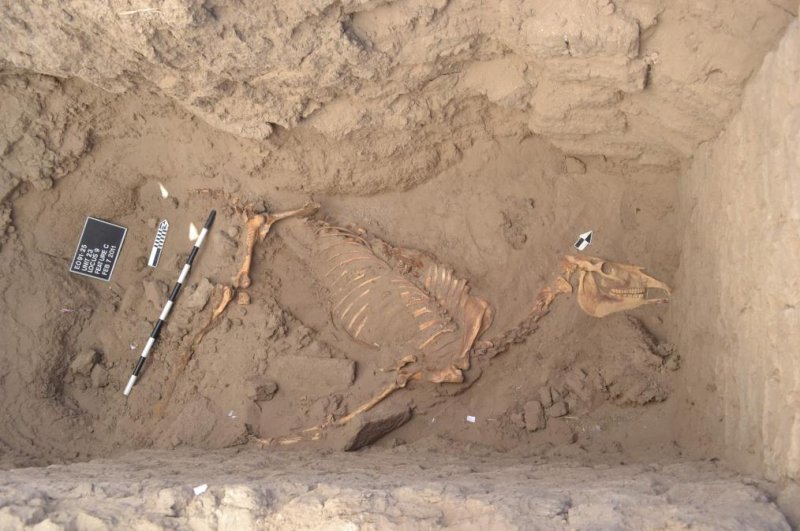 Archaeologists believe an ancient horse burial was a symbolic signature of the ascendant Kushite Dynasty. Photo by Purdue University

April 25 (UPI) -- It's not everyday archaeologists get to open up an ancient tomb in northern Sudan. It's even rarer to find a horse in one.

The horse was discovered in the ancient village of Tombos in the Nile River Valley.

"Finding the horse was unexpected," said Sarah Schrader, a Purdue University grad who assisted the excavation. "Initially, we weren't sure if it was modern or not."

RELATED Egyptian mummy discovered in coffin thought to be empty

It soon became obvious that the horse was ancient and buried intentionally. Archaeologists found a scarab, a burial shroud and an iron cheekpiece nearby. The horse was so well preserved, patches of reddish brown fur were found still attached to the animal's legs.

"Of course, we became even more excited when the carbon-14 dates were assessed and confirmed how old the horse was," said Schrader, who now conducts archaeological research at Leiden University in the Netherlands.

Results of the radiocarbon tests dated the horse's buried to 950 BC.

Analysis of the remains -- detailed in the journal Antiquity this week -- showed the horse was treated well in life and was important to its owners, which is likely why it received a proper burial.

"The fact that one of the earliest pieces of iron from Africa was found in association with the horse reiterates how special it was to the people," Schrader said.

In their paper describing the novel discovery, Schrader and her research partners argue the horse was important to more than just its owners. It was a symbol of a new, ascendant regime.

Around 1500 BC, Egyptians expanded southward, colonizing new territory and taking control of important regional trade routes. By the time the horse was buried, however, Egypt was losing it's grip on some of its colonies.

The Third Intermediate Period, beginning with the death of Pharaoh Ramesses XI in 1070 BC, characterized political instability as the Kushites of Nubia began to organize into a cohesive political, economic and military regime.

By 728 BC, the Nubians would conquer Ancient Egypt and establish the Kingdom of Kush, or the Kushite Dynasty.

In the context of the region's ancient political transition, researchers argue the buried horse offers an early cultural signature of Nubian rule -- a cultural signature born of the complex relationship between colonizing powers and native populations.

"For Nubians, they really elaborated on Egyptian materials and practices in a way that you don't see in Egypt," Smith said. "That's the case with a lot of these features that Nubians were borrowing. They often take something they really like, like horses, and they make it much more elaborate, through ritualized burial, than the examples that you have in Egypt."