Pesticides to blame for honeybee colony collapse disorder, not mites

Though mites do kill honeybees in their hives, pesticides are primarily responsible for the mass abandonment of nests, according to new research. 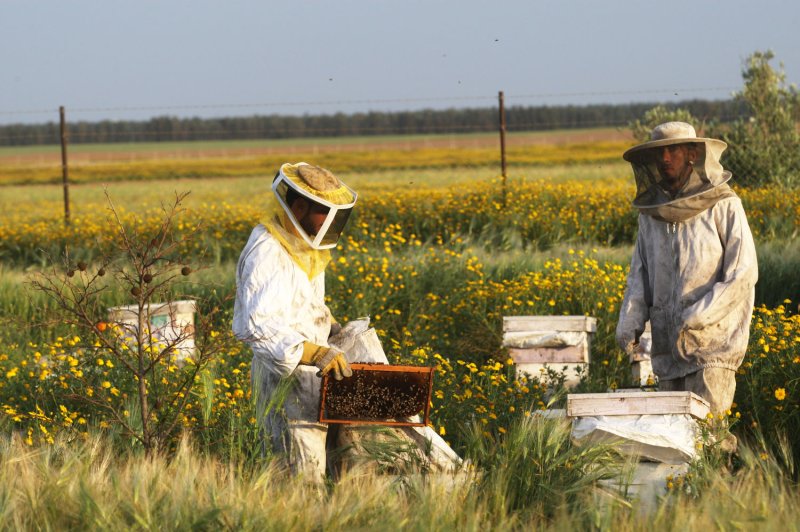 Significant rates of colony collapse disorder have been reported all over the world. UPI/Ismael Mohamad | License Photo

CAMBRIDGE, Mass., May 9 (UPI) -- Though parasitic mites continue to infect and kill honeybees, a new study suggests they are not to blame for colony collapse disorder (CCD), the phenomenon blamed for rapidly depleting the world's honeybee population -- pesticides are.

Harvard researchers, working with beekeepers in Massachusetts, kept tabs on 18 bee colonies, six hives in three different locations -- from October 2012 to April 2013. Half the colonies were treated with a non-lethal dose of two neonicotinoid pesticides.

The researchers found that at least a portion of bees abandoned all 18 nests throughout the cold winter. But whereas warmer temperatures encouraged the return of colonies to the pesticide-free nests, those sprayed with imidacloprid or clothianidin -- two of the world's most popular neonicotinoids pesticides, mainstays of industrial farming -- continued to suffer declining numbers into April.

The results suggest cold winters may exacerbate the ill effects of pesticides on bees and the colonizing behaviors.

RELATED Turning left and right at Indy for the first time

"It is striking and perplexing to observe the empty neonicotinoid-treated colonies because honey bees normally do not abandon their hives during the winter," the scientists wrote in the newly published study. "This observation may suggest the impairment of honey bee neurological functions, specifically memory, cognition, or behavior, as the results from the chronic sub-lethal neonicotinoid exposure."

Almost all of the colonies untainted by these two pesticides demonstrated normal recolonization behaviors and progressed healthfully throughout the summer and into the fall season. One colony, however, was wiped out by Nosema ceranae, an intestinal parasite. These bees were found deceased inside their nests; thus, scientists concluded the mites play little to no role in provoking CCD.

The study was published this week in the Bulletin of Insectology.