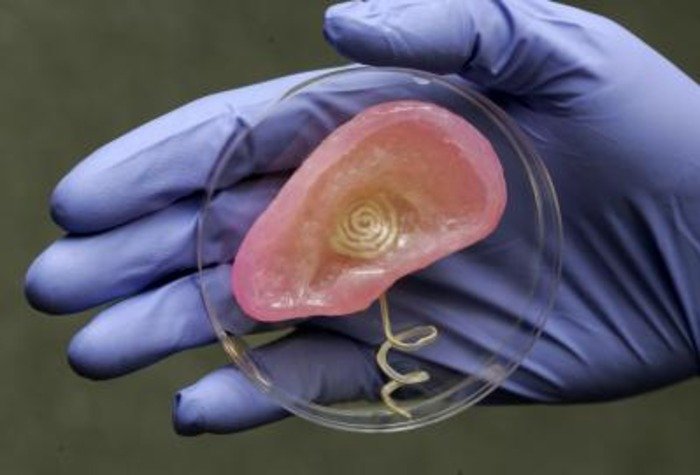 Scientists at Princeton University said their primary purpose in creating the bionic ear was to explore an efficient and versatile means of merging electronics with tissue, using 3D printing of cells and nanoparticles followed by cell culture to combine a small coil antenna with cartilage.

"In general, there are mechanical and thermal challenges with interfacing electronic materials with biological materials," engineering Professor Michael McAlpine said. "However, our work suggests a new approach -- to build and grow the biology up with the electronics synergistically and in a 3D interwoven format."

The research team's first effort to create a fully functional organ has resulted in one that not only replicates a human ability, but extends it using embedded electronics, a Princeton release said Thursday.

Writing in the journal Nano Letters, the researchers said, ""The design and implementation of bionic organs and devices that enhance human capabilities, known as cybernetics, has been an area of increasing scientific interest."

The finished ear consists of a coiled antenna inside a cartilage structure. Two wires lead from the base of the ear and wind around a helical "cochlea" -- the part of the ear that senses sound -- which can connect to electrodes.

"This field has the potential to generate customized replacement parts for the human body, or even create organs containing capabilities beyond what human biology ordinarily provides," the researchers wrote.