Dec. 3 (UPI) -- A New Jersey family received a shock when a giant chunk of ice crashed through the roof of their home and ended up in the kitchen.

Kim Paradise said she was giving medicine to her baby at the family's Marlton home when she heard a loud noise coming from another room.

"We heard something come through, it was like an explosion," Paradise told WPVI-TV.

The ice chunk crashed through the roof of the home and punched a hole in the kitchen ceiling. Paradise said smaller pieces of ice were found outside the home.

"There's ice outside on the grass. There's ice in our back yard, on our roof," she said.

Paradise said it was not clear where the ice came from, but there had been planes flying overhead at the time of the incident.

Paradise said no one inside the home was injured.

A Wisconsin man received a similar surprise in May when a 12.6-pound chunk of ice crashed through the roof of his family's house and into his bedroom. The origins of the ice chunk that crashed into Ken Millermon's Elk Mound home were unclear. The National Weather Service said storm clouds in the area were not strong enough to have created such a large piece of ice. 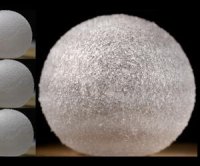