Dec. 11 (UPI) -- A video going viral on social media appears to show a scuba diver's uncomfortably close call with a massive great white shark -- but some are questioning its authenticity.

The video, which was first shared by Dennis Dempsey on the Ocean Imaging Action Facebook page before being shared on the SA Spearfishing page on Facebook and Australian ocean adventuring group Young Bloods Inc's Instagram, appears to show a gargantuan great white shark swimming over the man's head, with its open jaws coming within inches of the man.

SA Spearfishing said the video was filmed in South Africa by the diver's son.

Some commenters questioned the authenticity of the footage.

"Ahhh... the Great White Photoshop, sadly these beautiful creatures are becoming rarer since the heady days of 'jumping out of the water at a diver climbing up a rope ladder into a helicopter with the golden gate bridge in the background,'" one skeptical commenter wrote.

Odd News // 38 minutes ago
Message in a bottle found in Iowa after nearly 40 years
Jan. 21 (UPI) -- A hunter searching for deer on the shores on Iowa's Saylorville Lake made a surprising discovery: a message in a bottle from 1983.

Odd News // 1 hour ago
Reddit helps reunite backpacker with long-lost travel diary
Jan. 21 (UPI) -- An Australian man who found an old travel diary in a cupboard at a rental property was able to reunite it with the backpacker who lost the journal about 20 years earlier.

Odd News // 4 hours ago
Loose cow in Massachusetts captured after six months
Jan. 21 (UPI) -- A cow that was on the loose in a Massachusetts town for more than six months was finally lured into a trailer and will receive a new home at a sanctuary. 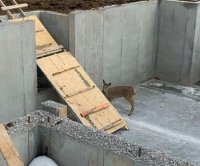 Odd News // 23 hours ago
Deer rescued from basement of house under construction
Jan. 20 (UPI) -- Conservation agents in Missouri rescued a deer that wandered onto a construction site and became trapped in the basement foundation.

Odd News // 23 hours ago
Florida man reunited with class ring after 53 years
Jan. 20 (UPI) -- A Florida man who lost his high school class ring more than 53 years ago had the item returned to him after its discovery at a U.S. Army base in Hawaii led to a search for its owner.