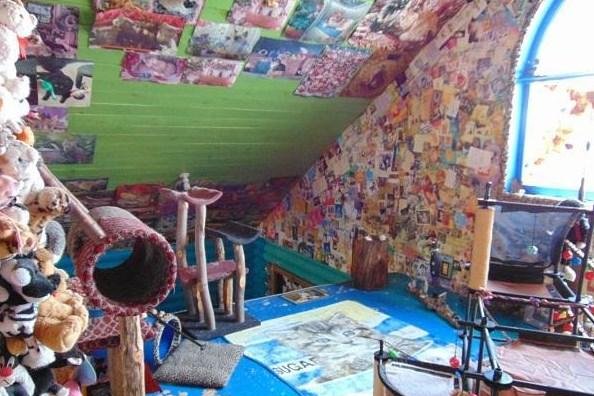 A house for sale near Concho, Ariz., looks like a normal log cabin home from the outside, but the inside is a "cat utopia." Photo courtesy Century 21 High Country

A house for sale near Concho, Ariz., looks like a normal log cabin home from the outside, but the inside is a "cat utopia." Photo courtesy Century 21 High Country

June 14 (UPI) -- A "must see to believe" home for sale in eastern Arizona might look like a normal log cabin house from the outside, but the inside hides a cat person's paradise.

"All the pictures on the walls are basically postcards or pictures she's cut out of magazines," Keller told The Arizona Republic.

Listing agent Sara Reidhead said she was not prepared for the house, even after the owner described it to her as a "cat utopia." She told KPNX-TV she was expecting "a couple" of cat-related items in the house, not the feline-centric domicile that even bears the image of a cat on its toilet flusher.

"If you love cats this is the home for you! If not bring your sandblaster!" states the listing, which asks $240,000 for the home. "Must see to believe it does exist!!! Once in a lifetime find extremely fun home!"

The agents said they have received some inquiries about the house, but thus far no offers.

Odd News // 20 hours ago
Deer rescued with head stuck in bird feeder
Jan. 15 (UPI) -- A mule deer in Pine, Colo., was rescued by park rangers after getting its head jammed into a 10-pound plastic bird feeder.

Odd News // 20 hours ago
Dog missing in stolen car returned after two weeks
Jan. 15 (UPI) -- A dog stolen in Denver on New Year's Day inside an unlocked car was returned to its owner after being missing for two weeks.