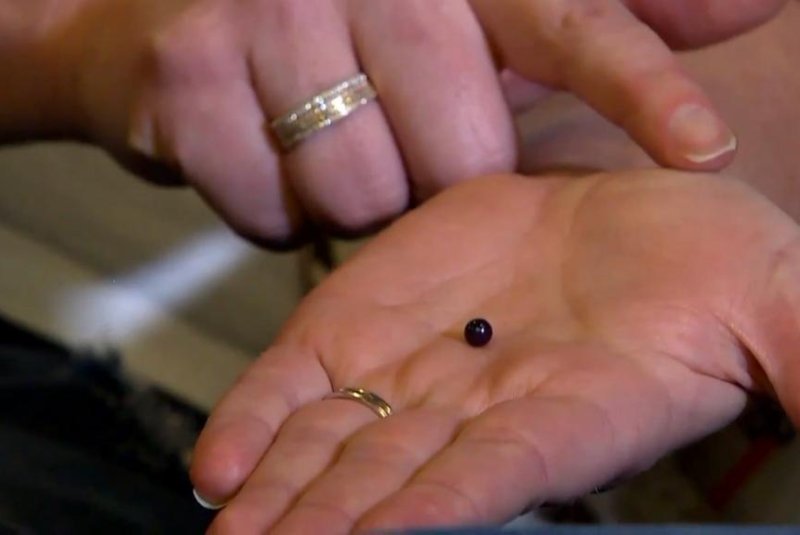 ISSAQUAH, Wash., Feb. 24 (UPI) -- A Washington state woman dining out with her husband said she nearly broke a tooth on a hard object that turned out to be a $600 pearl.

Lindsay Hasz said she and her husband, Chris, were eating at the Montalcino Ristorante Italiano in Issaquah when she felt the object in her mouth.

"I ordered a seafood dish that was clams and mussels with linguine in a white-wine and lemon sauce," Hasz told the Seattle Times. "About midway eating through my meal, I bit down on something hard. I almost broke my tooth, it was so hard."

Hasz said she spit out the object and found it appeared to be a pearl.

"I thought maybe it was an earring from an employee in the kitchen and it fell into my dish," Hasz told KOMO-TV.

The diner said she took the object home and her curiosity was piqued when she noticed a purple tint to the sphere.

"When I Googled this pearl, I found a very specific kind of pearl called a Quahog pearl. They're very rare. I saw some on sale online for thousands of dollars," Hasz said.

Hasz took the pearl to Ted Irwin of Northwest Geological Laboratory in Bellevue.

"He thought it looked so round and perfect that someone was playing a joke on me," Hasz said.

Irwin confirmed he was initially skeptical.

"I have heard that scenario in my 35 year career and it has turned out to be nothing much," Irwin said.

However, Irwin was able to confirm the object was a Quahog pearl of gem quality.

"One in a couple million is of gem quality, so it is a very rare occurrence," Irwin said.

Irwin estimated the 1-carat pearl's value at about $600.

Montalcino owners Fernando and Cindy Nardone joked their workers are keeping a closer eye out for pearls in the clams that pass through the kitchen.

"It shows we serve nothing but the best," Cindy Nardone told The Issaquah Press.

Odd News // 6 hours ago
Workers dig through trash to recover lost wedding rings
Nov. 29 (UPI) -- A New Hampshire man who accidentally threw his wife's wedding rings in the trash was able to find them again with some help from sanitation workers.

Odd News // 10 hours ago
Angler finds message in a bottle in Maryland
Nov. 29 (UPI) -- A Virginia angler casting his line in the Chesapeake Bay said his most exciting catch of the day wasn't a fish -- it was a message in a bottle.