LA GRANGE, Ill., Dec. 23 (UPI) -- A Chicago-area mom whose son was twice arrested for operating a meth lab said the man, who wore a Breaking Bad T-shirt in his mug shot, was only making wine.

Daniel Kowalski, 23, pleaded guilty Friday to misdemeanor and felony drug possession charges and was sentenced to two years of probation and 30 hours of community service.

However, Kowalski's mother, Jan Kowalski, said her son was not making methamphetamine when police raided his home in unincorporated La Grange Highlands in February 2014.

The mother said the items identified by police as inactive meth lab equipment -- glass beakers, burners and chemicals -- had another purpose.

"He had winemaking equipment," Jan Kowalski told the Chicago Tribune.

She said her son used the equipment recently to manufacture two batches of wine.

Kowalski, who was previously arrested for operating a meth lab at his home in July 2013, was wearing a "Los Pollos Hermanos" T-shirt inspired by the meth-themed TV series Breaking Bad when he posed for his mug shot in 2014.

Odd News // 13 hours ago
Maryland woman uses lottery winnings to buy $100,000 payout ticket
June 15 (UPI) -- A Maryland woman who once claimed two $500 lottery prizes in a single day said she used some winnings from a minor prize to buy a ticket that earned her a $100,000 jackpot.

Odd News // 13 hours ago
Painting bought for $4.09 at thrift shop identified as David Bowie original
June 15 (UPI) -- A painting purchased for less than $5 at a Canadian thrift store is now up for auction after the artist was identified as music legend David Bowie.

Odd News // 15 hours ago
Porch-trespassing alligator takes ride in Florida deputy's patrol car
June 15 (UPI) -- Authorities in Florida said an alligator found trespassing on a family's porch got a free ride to a nearby lake in the back of a patrol car.

Odd News // 18 hours ago
Deputies wrangle loose kangaroo in Texas neighborhood
June 15 (UPI) -- Authorities in Texas said a kangaroo spotted hopping loose through a neighborhood was safely captured and returned to its owner. 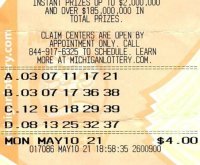