After receiving a five-day jail sentence, Karen Holloway's punishment for not mowing her lawn according to city ordinance was reduced to six hours in a cell.

LENOIR CITY, Tenn., Oct. 19 (UPI) -- A judge in Tennessee gave a woman a reduced six-hour jail sentence because she failed to keep her lawn mowed according to standards set forth by city ordinance.

Karen Holloway first recieved a citation from Lenoir City over the summer, indicating that her lawn wasn't maintained properly. At a hearing last week, Judge Terry Vann sentenced her to five days in a local jail for the offense.

"It's not right," Holloway told WLTV. "Why would you put me in jail with child molesters, and people who've done real crimes, because I haven't maintained my yard."

Holloway appealed after claiming that she had been "bullied," was not read her rights and was never told she could have a lawyer present. Vann reduced the sentence to six hours on Tuesday, and Holloway turned herself in at 5 p.m. to be processed into the jail.

A mother with a full-time job, one vehicle and two children living at home, Holloway admitted that she had let the yard go, but that it was "certainly not a criminal offense." She said that she had received similar citations in the past when her husband was deployed with the military overseas.

Vann said at the appeal that Holloway was not a criminal, but insisted on the six-hour sentence even after Holloway requested community service instead. Vann said that Holloway could face more jail time if progress on the lawn was not satisfactory by November, when the next hearing was scheduled.

"This opens a floodgate to everybody in Lenoir City being put in jail for silly things," Holloway said.

Authorities in Lenoir City have not responded to media requests for comment.

In 2007, a grandmother was reportedly jailed after refusing to give her name to an officer who was writing her a ticket for not watering her lawn according to zoning ordinance in Orem, Utah.

Odd News // 14 hours ago
California angler rescues whale entangled in lobster trap
Oct. 21 (UPI) -- A San Diego angler fishing with friends about 100 miles off the coast came to the rescue of a whale found entangled in a lobster trap. 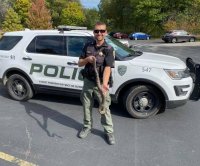