The event began at 6:30 a.m. Sunday and Foote was aiming to finish the song for the 911th time by 6:46 a.m. Tuesday, coinciding with the 11th anniversary of the attacks in New York, Washington and Pennsylvania.

"There have been things in my life that I haven't followed through on ... but this is really an important thing to follow through on, for me," Foote said Thursday. "I would love for the community to stop whatever they're doing at 6:40 on Tuesday and sing with me that 911th time."

The event will also feature actors dressed as former presidents for photo-ops and a Native American flutist.

Foote said the event will be a low-key opportunity for people to reaffirm their patriotism.

Odd News // 7 hours ago
Lottery winner's 'random' numbers came from drawing a picture
July 6 (UPI) -- An Australian woman who won a lottery jackpot worth more than $1 million said she used an unusual method to choose her numbers: drawing a picture.

Odd News // 7 hours ago
Estonian town approves letter sculpture to celebrate dialect
July 6 (UPI) -- An Estonian city with a proud pronunciation history will host a sculpture of the favorite local letter, "Ö," thanks to a compromise between residents and the Road Administration.

Odd News // 8 hours ago
Frog stows away from Colombia to Wales in shipment of bananas
July 6 (UPI) -- Animal rescuers in Wales said an exotic frog hitched a ride with a shipment of bananas and was found at a grocery store 5,000 miles from its home in Colombia. 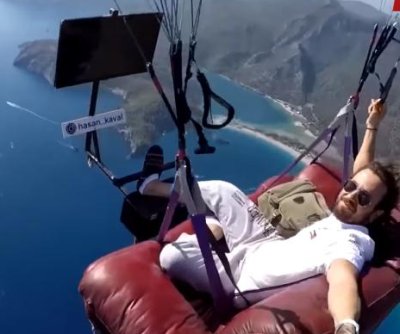 Odd News // 11 hours ago
Kitten rescued from pipe under Phoenix cellphone tower
July 6 (UPI) -- A 5-week-old kitten that became trapped in an underground pipe beneath a cellphone tower in Arizona was rescued in a nearly five-hour rescue operation.