Medical marijuana use on the rise among cancer patients

Americans with cancer are more likely to use marijuana and prescription opioids than those without cancer, and the use of medical marijuana by this group is on the rise, new research shows.

Pain is common among cancer patients, but many do not get adequate pain relief, the researchers noted.

The new study looked at more than 800 adults with cancer who took part in the U.S. National Health and Nutrition Examination Survey between 2005 and 2014. The patients were compared with about 1,650 adults without cancer.

The findings showed that 40 percent of the cancer patients had used marijuana within the past year, compared with 38 percent of those without cancer.

People with cancer were also more likely to use prescription opioids than those without the disease -- nearly 14 percent versus just over 6 percent, respectively.

A cancer diagnosis did not significantly affect the odds of substance abuse between 2005 and 2014, according to the study published online April 22 in the journal Cancer.

Study co-author Dr. Jona Hattangadi-Gluth, noted that legalization of medical marijuana has been associated with a drop in hospitalizations for opioid abuse or dependence. If patients are substituting marijuana for opioids, it may be an opportunity for reducing opioid-related illness and death, she suggested.

"Of course, it will also be important to identify risks and adverse effects of marijuana, which has not previously been studied on large randomized clinical trials, given its scheduling as a class 1 controlled substance," Hattangadi-Gluth said in a journal news release.

The American Cancer Society has more on cancer pain.

Health News // 7 hours ago
Study: Little progress in boosting numbers of Black doctors in U.S.
The percentage of U.S. doctors who are Black has barely risen in the past 120 years, and there's still a wide pay gap between White and Black physicians, a new study finds.

Health News // 16 hours ago
Global access to COVID-19 vaccines needed to end pandemic, experts say
April 21 (UPI) -- The COVID-19 vaccines have provided the pandemic-weary public with a "light at the end of the tunnel," but the threat posed by the virus will not end until more of the world has been immunized, experts say.

Health News // 18 hours ago
Eviction bans helped stop COVID-19 spread in cities, study says
Eviction bans during the COVID-19 pandemic reduced infection rates not only in people who avoided displacement but also in their communities, according to a new study.

Health News // 21 hours ago
Listening to sedative music improves sleep in older adults, study finds
April 21 (UPI) -- Older adults who listen to music at night sleep better than those who don't, according to an analysis published Wednesday by the Journal of the American Geriatric Society.

Health News // 1 day ago
Study: Proper fit crucial for masks to work, even when wearing two
Two snug, well-fitted face masks can significantly reduce your risk of COVID-19 infection -- but a good fit is key. A new study found that two ill-fitting cloth masks aren't as good as one snug-fitting surgical mask. 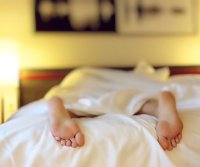 Health News // 1 day ago
Study links sleepwalking to higher odds for Parkinson's in men
Men with certain sleep problems, like sleep walking, may be at a higher risk of developing Parkinson's disease, a new study suggests.