There's a worldwide shortage of donor kidneys available for transplantation, but France appears to have been more aggressive than America in responding to that shortage, said study co-author Dr. Peter Reese. TUESDAY, Oct. 30, 2018 -- When deciding which donated kidneys can help desperate patients on waiting lists, the United States might want to follow France's lead and lower the bar, a new study argues.

There's a worldwide shortage of donor kidneys available for transplantation, but France appears to have been more aggressive than America in responding to that shortage, said study co-author Dr. Peter Reese. He's a kidney transplant doctor and associate professor at the University of Pennsylvania's Perelman School of Medicine.

The study shows that France is using kidneys from donors who are much older, on average, than in the United States.

"Basically they're accepting donor kidneys that are much lower quality and higher risk," Reese said. "To me, it shows that this other country with a very advanced health care system that looks a lot like our own in many ways is pushing the envelope on the donors and the transplants that they'll do, whereas we really aren't."

There currently are more than 95,000 people on the U.S. kidney transplant waiting list, according to the United Network for Organ Sharing, or UNOS, the nonprofit that manages America's organ transplant system.

Despite this shortage, approximately 2,000 donated kidneys are discarded each year, researchers said.

To gain some insight into the issue, Reese worked with a French research team to compare the relative health of donated kidneys in each country and how the organs are used.

The researchers evaluated transplant data from 2004 to 2014, during which time more than 156,000 kidneys in the United States and nearly 30,000 kidneys in France were procured for transplant.

A much higher proportion of kidneys were higher-risk organs in France, scoring an average 65 on the Kidney Donor Profile Index, or KDPI, compared with an average score of 42 for U.S. kidneys used in transplant.

French surgeons tend to accept kidneys for transplantation from much older recipients, the researchers found.

"The mean age of the French donors was 17 years older than the United States," Reese said. "They are responding to the organ crisis by accepting older and older donors."

Accepted kidneys in France also tended to be more often from donors with chronic conditions like high blood pressure and diabetes, Reese said.

Because of this, the French average KDPI rose from 54 to 67 during the decade, while the U.S. average KDPI increased only from 42 to 44.

"Over 10 years in the United States, there was really no change in the age of the donors and the quality of the donors," Reese said.

The United States could do a better job matching kidneys to recipients, even if the organs aren't the best quality, Reese concluded.

He gave the example of a kidney donated by an 80-year-old person.

"It would be a mistake to take that kidney in the United States if the recipient is 30 years old, but we have people who are on our kidney transplant waiting list who are over 70," Reese said. "If we tried hard, I don't think we would have too much difficulty finding appropriate recipients for these kidneys from older donors."

Klassen, who wasn't involved with the study, said that U.S. transplant centers tend to be risk-averse because they don't want to run afoul of regulators and endanger their certification.

To be fair, there are some donated organs that simply shouldn't be taken. "Just because a kidney is procured and possibly could be transplanted doesn't mean that it should be," Klassen said.

There also are major differences in the organ donation and transplant system between France and the United States, in terms of how organ quality is judged and kidneys are biopsied at the time of organ offer. "It's hard to say the results of one country would directly translate to another country," Klassen said.

But the U.S. Centers for Medicare and Medicaid Services tacitly admitted there's an oversight problem. The agency has put out for comment a rule change that would loosen its monitoring criteria, Klassen said.

"They would look at other measures of program quality and not focus specifically on patient one-year outcomes as the sole measure of program quality," Klassen said. "I don't think monitoring of patient and graft outcomes will ever go away, but I think using a broader palette of quality of measures would be an appropriate thing to do in terms of judging transplant programs."

The study was scheduled for presentation Sunday at the American Society of Nephrology's annual meeting, in San Diego. Such research is considered preliminary until published in a peer-reviewed journal.

The Organ Procurement and Transplantation Network has more about the Kidney Donor Profile Index.

Health News // 4 hours ago
Study: Alcohol-linked deaths soar in U.S., hit women hardest
The rate of alcohol deaths among women increased 3.1 to 3.6 percent per year from 2000 to 2016, and 1.4 percent to 1.8 percent per year for men, according to new research.

Health News // 7 hours ago
Doctors use robotics to treat brain aneurysm
Canadian doctors who conducted the first robotic surgery to treat a brain aneurysm say the approach could boost the availability and precision of lifesaving stroke care.

Health News // 3 days ago
Diuretic used for blood pressure treatment linked to serious side effects
Patients taking a common diuretic to help lower blood pressure may be better off with a similarly effective but safer one, a new study suggests.

Health News // 17 hours ago
State Department plans no future coronavirus evacuations
Feb. 21 (UPI) -- State Department officials Friday cautioned that American citizens trapped in areas impacted by COVID-19 in the future should not rely on government-sponsored evacuation flights to get home.

Health News // 17 hours ago
Healthy diet may boost sperm count, study says
In a study of more than 2,900 Danish men, median age 19, those whose diet was rich in fish, chicken, vegetables, fruit and water had higher sperm counts than those who ate a "Western" diet.

Health News // 19 hours ago
WHO coronavirus team to visit Wuhan this weekend
Feb. 21 (UPI) -- WHO on Friday confirmed that its 12-member team on the ground in China will be visiting Wuhan, ground zero for the outbreak, and announced six special envoys to confer with world leaders to coordinate global response.

Health News // 20 hours ago
Visits, postive tests for flu drop in U.S., suggesting season is slowing
Feb. 21 (UPI) -- The CDC noted that for the week ending February 15, 6.1 percent of all visits to healthcare providers were related to influenza-like illness, down from 6.7 percent the prior week. 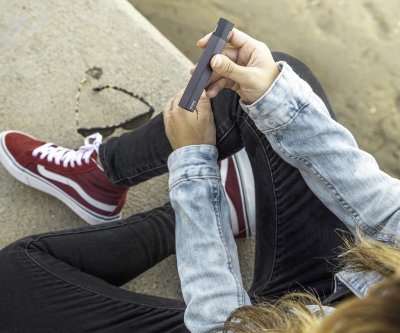 Health News // 21 hours ago
Lung illnesses may have pushed some in U.S. to quit vaping
New research suggests that last summer's spate of severe lung illnesses tied to vaping prompted many Americans to consider giving up e-cigarettes.

Health News // 22 hours ago
One in five family caregivers also in poor health
Caring for a loved one at home can be rewarding, but it can also be overwhelming and take a toll on your own health, a new study suggests.

WHO coronavirus team to visit Wuhan this weekend