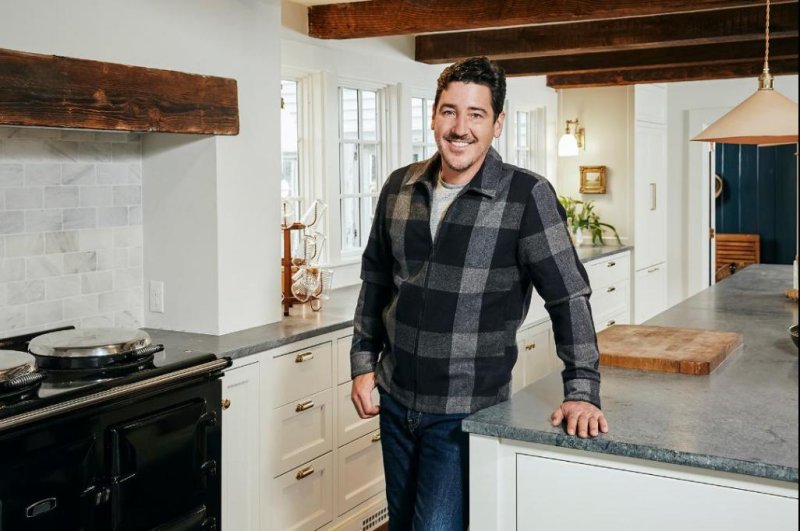 Jonathan Knight can now be seen in the renovation docu-series, "Farmhouse Fixer." Photo courtesy of HGTV

NEW YORK, Mar 2 (UPI) -- Viewers of Jonathan Knight's six-episode docu-series Farmhouse Fixer might be surprised to learn that the New Kids on the Block singer has been renovating homes for 25 years.

As a lifelong lover of old houses and a fan of HGTV programming, Knight knew his unique career could make good television.

Premiering Wednesday on HGTV, Farmhouse Fixer follows Knight as he renovates dilapidated old structures and reimagines them as functional, contemporary spaces that honor their unique histories.

"I just started knocking on producers' doors for the last six years and finally found High Noon [production company] and they shopped it around and now it's on HGTV, which just still blows my mind," Knight told UPI in a recent phone interview.

Knight's first foray into television without his NKOTB brothers was in 2014 when he and his then-boyfriend Harley Rodriguez competed on CBS' The Amazing Race.

"I was so nervous and that was the reason I did it. I was just like, 'I just have to do this and face my fears and do it,' and it was just a good experience that I was like, 'OK, this isn't so scary,'" he said. "It just got to be so natural that it was like the camera wasn't even there."

The 52-year-old Boston native said he enjoyed everything about making Farmhouse Fixer.

"It's just the transformation and being able to give families a different type of life that they never thought of," he said. "The biggest challenge was just really getting contractors to keep moving and keep on schedule."

Working during the fall and winter in the northeastern United States wasn't easy.

"That was the worst! That is one of the downfalls of construction in New England," Knight said. "We were pouring a concrete foundation in 8-degree weather, freezing our butts off."

In the first episode, Knight explores a cramped crawl space under a centuries-old house with a sagging ceiling above him.

Audiences might gasp at the scene, but it didn't bother Knight.

"Ever since I was a kid, every single house that I've had, we've had these creepy New England basements that are musty with spiders and mice," he laughed. "I actually kind of love going down in basements."

One woman was a NKOTB superfan who had been on the boy band's cruises, attended its concerts and even had a photo of her with Knight.

But she kept her secret to herself until the cameras were rolling.

"It was halfway through that she finally let on, so that was really funny," he said. "There were different instances where I've flipped houses in the past and we go to sell them and I show up at the closing and the wife gives me a look like, 'Wait a minute...'"

Knight said he hopes the show will foster an appreciation for old structures and furniture and encourage people to fix and restore pieces instead of tossing and replacing them.

"We are such a consumer society now where we just jump online and order something new, if something breaks," he said.

He said that houses used to be built better and nowadays are disposable.

"We are building these houses that will last 50 years and then they are going to need so much major work. There's detail in old houses, craftsmanship that is no longer in the building trade," Knight said.

Touring the world with NKOTB -- spending a lot of time in hotels and on buses -- made Knight appreciate being home and loves where he lives.

"If New Kids didn't happen, I would have always been a homebody," Knight said.

"During the heyday of New Kids, I was still living in the city and you'd walk out the door and there would be 200 girls at the bottom of the driveway that would follow you everywhere. So, when I was 20, I moved to a 20-acre farm in Essex, Mass., and you couldn't see the house from the driveway. It was private. That became a real sanctuary, getaway place that I just loved."

On stage with NKOTB

Now that he has had an extended break from performing live because of the pandemic, Knight is looking forward to getting back onstage with the band and interacting with their diehard fans.

The singer said he was disappointed they had to cancel their cruise, which they do annually with 3,000 fans.

"We just go out for four days and walk the hallways and meet people, hug people. Half the people on the boat, I know their faces because I've seen them so many times. So that part is really bad," he said, adding a Fenway Park concert NKOTB was really excited about was also scrapped in September.

Knight said the group consulted its manager and it seems like a tour this year is unlikely because canceled tours will be rescheduled, causing events to get backed up.

"Even in 2022, we might not be able to book arenas because somebody else already booked them," he said.

"It may be a while before we're back on tour," he added. "It's been a crazy past two years, but we'll get back there."

TV // 16 hours ago
'Shadow and Bone' Season 2 coming to Netflix in March
Dec. 8 (UPI) -- "Shadow and Bone," a fantasy series starring Jessie Mei Li and Archie Renaux, will return for a second season on Netflix.

TV // 19 hours ago
Mariah Carey says she never called herself 'Queen of Christmas' on 'Colbert'
Dec. 8 (UPI) -- Mariah Carey talked about Christmas music and traditions in an appearance on "The Late Show With Stephen Colbert."