Drake, Jay-Z, and Beyonce are expected to be the top nominees for this year's awards.

"We've been trying to make this happen for a very long while, and we're ecstatic that Chris Rock will be the host of the BET Awards for the first time," said Stephen Hill, president of Music Programming and Specials at BET, in a statement.

Rock, known for his in-your-face comedy, is a big fan of hip-hop and is as excited as BET to be hosting the show.

"I watch the BET Awards every year," said Rock in a statement. "It's one of my favorite award shows combining people from movies, sports, TV and music. Where else can you get Rick Ross and Michelle Obama in the same room?! The BET Awards is like a party where nothing is off limits. My peers have done the show now it's my turn."

TV // 12 hours ago
Milo Ventimiglia: 'This Is Us' speaks to everyone
NEW YORK, May 11 (UPI) -- "This Is Us" star Milo Ventimiglia said even he is surprised at how rich and complicated a character Jack Pearson has turned out to be.

TV // 14 hours ago
Barry Jenkins: Therapist on 'Underground Railroad' set 'allowed people to be free'
LOS ANGELES, May 14 (UPI) -- Executive producer Barry Jenkins said he hired a therapist to be on set throughout the production of "The Underground Railroad" as the intense subject of the series caused emotional trauma. 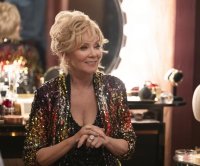