Lucy Hale feels 'more single than ever' amid COVID-19 pandemic

July 17 (UPI) -- Lucy Hale is feeling "more single than ever" amid the coronavirus (COVID-19) pandemic.

The 31-year-old actress discussed her love life in an interview with Entertainment Tonight published Thursday.

Hale said she is single and has spent the pandemic "basically alone" but no longer hates being by herself.

"I feel more single than ever, but it's fine," the star said.

"I feel the only way I'm gonna date someone next is if they make my life better because I'm so happy right now having my own routine," she added.

Hale said she is on a dating site but has never met anyone in person because she is "too nervous" and "really shy." She said she doesn't have a physical type but is looking for someone with confidence and a sense of humor.

"Work ethic, drive, passion. I don't care what you do, just love it. Do everything a hundred and ten percent. A good moral compass. Just a good person," Hale added. "It's very simple what I'm looking for, but that's hard. Simple qualities are harder to find."

"I'm not settling for anything less than what I'm looking for. Because why? Why would I?" she said.

On Thursday, TMZ posted photos of Hale and The Bachelor Season 23 star Colton Underwood on a hike Wednesday in Los Angeles, sparking rumors the pair are dating. Sources said Hale and Underwood have had a few "casual hike dates" over the past few weeks.

Us Weekly said Thursday that Underwood has been dating since his split from Cassie Randolph.

"He is moving on as much as he can, has been dating and is excited about this new chapter," a source said.

Randolph won Underwood's season of The Bachelor, which ended with the couple together but not engaged. The pair announced their split in May 2019.

Randolph said on Instagram this month that she's had an "awful few months" since her split from Underwood.

Hale is known for playing Aria Montgomery on the Freeform series Pretty Little Liars. She portrayed the title character on the CW series Katy Keene, which was canceled this month after one season.

Music // 9 hours ago
Lil Nas X teases song with Miley Cyrus ahead of 'Montero' album release
Sept. 16 (UPI) -- Lil Nas X shared a clip of "Am I Dreaming," a new song featuring Miley Cyrus, ahead of the release of his album "Montero." 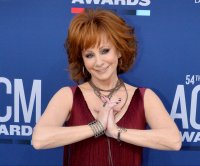 Entertainment News // 12 hours ago
Reba McEntire rescued after staircase collapses in historic Oklahoma building
Sept. 16 (UPI) -- Singer and actress Reba McEntire said she is grateful she escaped unharmed when the staircase crumbled in an historic building she was touring.
Advertisement