Us Weekly confirmed the 28-year-old television personality is dating Chris Lane, a singer known for the singles "Fix," "For Her" and "Take Back Home Girl" featuring Tori Kelly.

"Good time celebrating Country music ..Honored to be a part of the country music community and family! #cmaawards," Lane wrote on Instagram.

Lane said in an interview with Entertainment Tonight on the red carpet that he started dating Bushnell about a month ago.

"This is a new-found thing. I can finally say I found my 'Take Back Home Girl,'" he said of the relationship. "While she is very beautiful, she has the best personality of anybody I've ever met."

Bushnell and Lane made their red carpet debut as a couple Tuesday at the 2018 BMI Awards. Bushnell shared a gif of herself and Lane at the event on Instagram Stories. 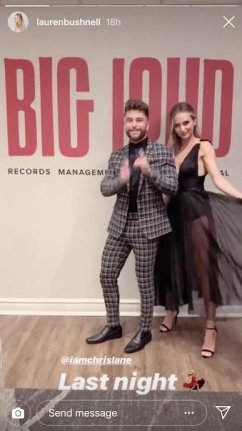 Lauren Bushnell shared a gif with Chris Lane from the 2018 BMI Awards on Tuesday. Screenshot via Lauren Bushnell/Instagram Stories

Bushnell was previously engaged to The Bachelor Season 20 star Ben Higgins. She split from Devin Antin in September after a year of dating.