Dennis Rodman on Kim Jong Un: 'We do a lot of cool things together'

"We sing karaoke, we do a lot of cool things together."
Dennis Rodman has spoken about his friendship with North Korean leader Kim Jong-un: pic.twitter.com/mu592c5la7

Sept. 6 (UPI) -- Dennis Rodman has detailed his friendship with North Korean leader Kim Jong Un and the activities the pair take part in when the retired basketball star visits the country.

"I basically hang out with him all the time, we laugh, we sing karaoke, we do a lot of cool things together," Rodman said during an interview with ITV's Good Morning Britain.

"We ride horses, we hang out, we go skiing," he continued.

Rodman also noted how he and Kim avoid the issue of politics. "We hardly ever talk politics and that's the good thing about that," the 56-year-old said.

He also noted, "I've never seen anyone in my life have that much power."

Rodman was last in North Korea in June stating that he was trying to "open a door" during a time of high tensions between Washington and Pyongyang. The country has test-fired several missiles in 2017 leading to new sanctions against the regime from the United Nations Security Council and U.S. Congress.

The basketball great has been to North Korea several times following his first visit in 2013. Kim is a fan of basketball, just like his late father Kim Jong II.

Rodman is said to have given Kim a copy of President Donald Trump's book The Art of the Deal during his past visit, The New York Daily News noted. The five-time NBA champion supported Trump during his 2016 political campaign and appeared as a contestant on Trump's reality television show, Celebrity Apprentice. 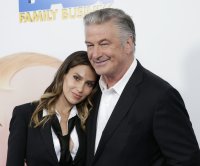