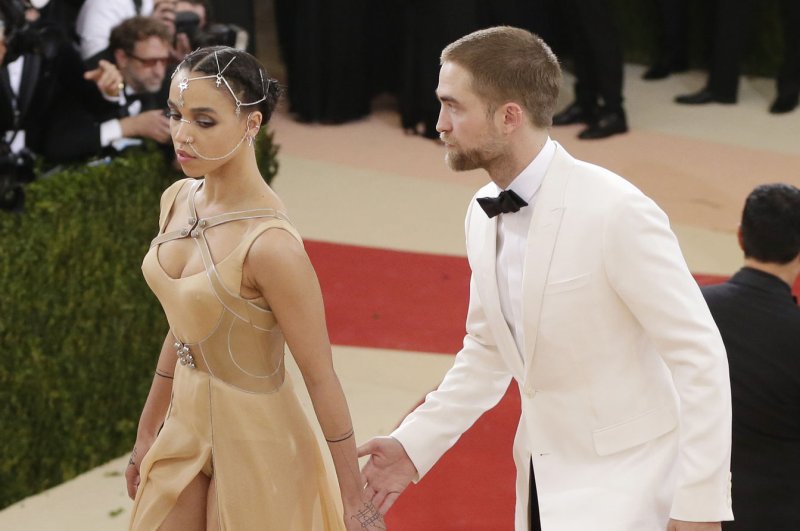 Robert Pattinson (R) and FKA twigs attend the Costume Institute Benefit at the Metropolitan Museum of Art on May 2, 2016. The actor addressed his status with FKA twigs this week. File Photo by John Angelillo/UPI | License Photo

The 31-year-old British actor addressed his status with the 29-year-old singer on Tuesday's episode of The Howard Stern Show while discussing the importance of protecting their relationship.

"It's one of the most frustrating things in the world because you want to be able to [be public]," he explained. "It's literally, you kind of get stuck in this position where you have to make decisions whether you want to let the crazy people in."

"To protect [the relationship] you kind of think, I want to create a big boundary between it, but then it makes it difficult for your actual relationship," the star confessed.

Pattinson praised FKA twigs as an "amazing" singer and a "super talented" performer. He and the singer, born Tahliah Barnett, started dating in 2014, and were last photographed together at the 2017 Cannes International Film Festival in May.

"There isn't a rush to get married," a source previously told E! News. "Fall plans turned into winter plans and now there are no specific plans, but they still plan on getting married."

"There is a special connection between the two of them," the insider added. "They clicked instantly and they literally have been inseparable."

Pattinson previously dated his Twilight co-star Kristen Stewart. He will next star in Good Time with Jennifer Jason Leigh, and is also slated for Damsel with Mia Wasikowska and High Life with Mia Goth.