Beyonce and Jay Z are 'used to' Solange's outbursts: Report

Insiders claim Solange's Met gala elevator outburst was "not the first time this has happened."

NEW YORK, May 13 (UPI) -- A day after TMZ unveiled a video of Beyonce's sister Solange Knowles furiously attacking rapper Jay Z, sources have come forward to claim this isn't the first time Knowles throws a fit of the sort.

"Solange has flipped her lid like that before," an insider told Us Weekly. "She is genuinely a sweet and nice person but she also keeps [expletive] real. She can take a small thing and it triggers her."

While there are many theories -- and a Twitter hashtag -- attempting to explain what prompted the 27-year-old singer to attack her brother in law in an elevator after the Met gala on May 5, sources close to the situation say it might have been related to a discussion between Knowles and designer Rachel Roy that took place earlier at the after party.

"This is not the first time this has happened," the source said about the elevator incident. "That's why Bey and Jay were so calm. They are used to this from Solange. It has definitely happened before."

The source went on to say that Beyonce's reaction was a "testament to [her] calm nature."

"[Beyonce] doesn't approve of violence," the source continued, adding that the trio are "trying to put the situation past them now."

While neither Jay Z, Beyonce or Solange have addressed the incident thus far, the couple seemed unfazed by the media scrutiny as they stepped out to watch a Brooklyn Nets game Monday night.

Entertainment News // 1 hour ago
Tik-Tok star Anthony Barajas dead at 19
Aug. 1 (UPI) -- Tik-Tok personality Anthony Barajas has died, days after he was shot in a California movie theater. He was 19. 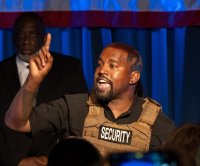