SAN FRANCISCO, Dec. 16 (UPI) -- Richard Carlson, the author of the book, "Don't Sweat the Small Stuff," died this week aboard a flight from San Francisco to New York.

Carlson, 45, was on his way from his Bay Area home to New York to make television appearances to promote his latest book, "Don't Get Scrooged: How to Thrive in a World Full of Obnoxious, Incompetent, Arrogant and Downright Mean-Spirited People," when he apparently suffered cardiac arrest on Wednesday.

The San Francisco Chronicle said Carlson was the author of more than 30 motivational books, and was a popular motivational speaker.

His pithy advice seems obvious, but he was able to break it down into simple fragments: "Don't answer the phone when you're rushing out the door," Carlson advised. "Give yourself, and others, a second chance," and "Don't kill yourself over a mistake."

One of his former literary agents told the Chronicle, "He preached what the Buddha preached, but without the preaching."

"Don't Sweat the Small Stuff" was published in 135 countries and was translated into 30 different languages. 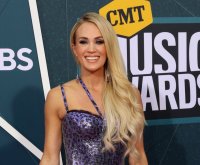 TV // 3 hours ago
Penelope and Colin will be focus of 'Bridgerton' Season 3
May 16 (UPI) -- "Bridgerton" actress Nicola Coughlan has announced which characters will be the focus of the Netflix costume drama's third season.