White House opens oil and gas assessments in the Atlantic up for public comment period. 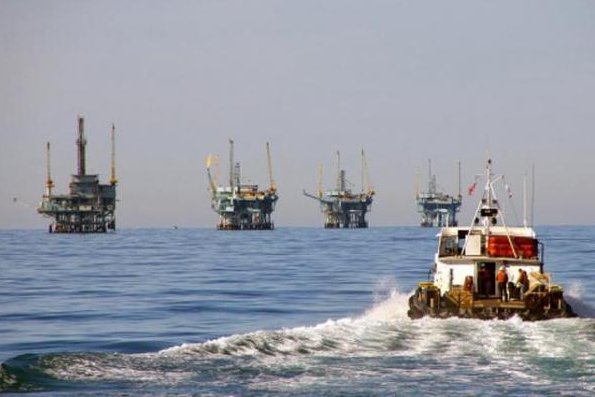 Critics of Trump-era energy policies suggest the need to express alarm over offshore work early, while the industry says the untapped reserves are vast. Photo courtesy of the U.S. Department of the Interior

June 6 (UPI) -- The White House took another step to opening up offshore oil and gas reserves using a method that an industry critic said poses a real ecological threat.

The office of President Donald Trump issued a draft for public comment in the federal registry for seismic airgun blasting in the Atlantic Ocean. The practice is used to get a better understanding of the reserve potential in a particular basin, though advocacy group Oceana said the method endangers marine mammals that use sound to function as species.

Nancy Pyne, a campaign director for Oceana, said the risk is elevated because of the steady stream of Trump initiatives aimed at unraveling the environmental legacy of his predecessor, Barack Obama.

"Coastal communities have the most to lose, but unfortunately their overwhelming opposition may be ignored by the Trump administration," she said in a statement. "The threats of seismic airgun blasting alone are bad enough, but it's also the first step to offshore drilling."

Oceana told UPI last year that around 1.4 million jobs and $95 billion in gross domestic product may depend on fishing, tourism and recreation along the Atlantic coast. For fish and other marine species, the group said the sound from seismic research interferes with normal communication patterns those species use and as many as 138,000 whales and dolphins are under direct threat.

Nicolette Nye, a spokesperson for the National Ocean Industries Association, said it estimates the Atlantic holds about 4.7 billion barrels of oil and 37.5 trillion cubic feet of natural gas, though those estimates are based on seismic surveys from more than 30 years ago.

"The offshore oil and gas industry has safely conducted seismic surveys in the U.S. and around the world for decades to assess the location and size of potential offshore oil and natural gas deposits," she told UPI.

RELATED Oil production in the Gulf of Mexico shows resilience

Parts of the Atlantic are banned from oil and gas drilling activity because of measures enacted by Obama. In May, the Interior Department said it would reassess permits denied to six companies looking to conduct seismic surveys in the Atlantic Ocean. Usually seen as a precursor to oil and gas drilling, Interior Secretary Ryan Zinke said it could advance other technologies as well.

His decision came a week after 15 Democratic senators, 11 of which border the Atlantic, reintroduced the Clean Ocean and Safe Tourism Act, which was drafted to prevent the federal government from issuing leases for oil and gas development in the Atlantic Ocean or the Straits of Florida.