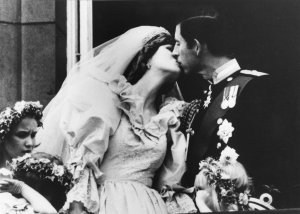 In the year's big happy story, the Prince and Princess of Wales kiss on the balcony of Buckingham Palace after their wedding at St. Paul's Cathedral on July 27, 1981. The heir to the British throne, Prince Charles, married the Lady Diana Spencer to the delight of millions. (UPI Photo/Files)

Nick Charles: In the middle of November, Hollywood and the rest of the world heard of the death of actor William Holden at the age of 63. Holden, a veteran of 50 films, was found dead in his Santa Monica, California apartment after apparently falling and hitting his head on the edge of a bedside table.

Jimmy Stewart: "Well, it's … came as a great shock to me, because Bill has been very active in his profession in the last years that he keeps -- keeps going on, keeps making pictures. He's had a wonderful career as an actor. He's done some very fine work, and which is why we hate to lose him."

On July 29th, 1982, Britain's Prince Charles ended his reign as the most eligible bachelor in the world. He was married to Lady Diana Spencer. In early November Buckingham Palace announced that Princess Diana was expecting sometime in June.

Nick Charles: 1981 in Review, written, produced and narrated by Nick Charles; technical supervisor Bob Honig. This has been a presentation of UPI Audio Network.

Nick Charles: 1981 in Review, a recap of the major news events of the year, can be heard on this station.