PROVIDENCE, R.I. -- John J. Partington's career led him from the routine beat of a smalltown cop to the dangerous world of hiding underworld mob snitches, hit men and Watergate figures.

He watched as Dean, the ambitious White House counsel, was locked behind prison bars.

'When that door shut, he broke down. Then, he finally realized he was all alone. That canchange a man,' Partington said.

In return for testimony against fellow criminals, many got new names and new lives.

'Yeah, I've known a lot of wise guys. Everyone I worked with had nicknames,' Partington said.

'We were like cops who check doors: you never know what you'll find. Sure, we were shot at a few times,' he shrugged.

'We were their friends, teachers, social workers, babysitters and bodyguards. You have to remember, some of these guys had nowhere to turn -- we were their only friends.'

The bottom line, Partington said, was to 'get a heavy on the witness stand and to get him to testify.'

Partington, who began his law enforcement career as a police patrolman in Cumberland, R.I., kept a low profile during his years with the program. The secrecy connected with his job demanded a tight lip. He's turned away several book, movie and television offers.

Now, he's U.S. marshal for Rhode Island and more willing to talk of his days in the fast lane with the underbelly of society.

Without hesitation, his memory zeroes in on Barboza, a self-described 'enforcer who kept other enforcers in line.' Partington's eyes sparkle below his salt-and-pepper hair to tell of it.

'He certainly taught me a lot. He was the one who taught me what a wise guy is.'

Fear brought the ruthless mob figure from South Boston over to the other side. Barboza found his employers increasingly hesitant to bail him out of frequent brushes with the law.

He considered it a message that his services weren't needed anymore. The message became clearer when two associates were gunned down in Boston.

'He decided he was going to be hit,' Partington said. 'In other words, he had no place to turn.'

'The only way we can get to the mob is by squeezing the middle man to get to the top,' Partington said.

Barboza was an important middle man.

For a year, Barboza, his wife, his daughter and his two German shepherds hid on Thatcher's Island -- a small dot of land used by the Coast Guard off Rockport, Mass. -- while he prepared his testimony.

They had Partington and 16 other federal marshals for company.

'He was the most different person I'd ever met. He could be the toughest SOB, then invite you over for dinner with the family.'

'It was his job to work for the mob, but he was a good family man. He was always concerned that his daughter would go to school,' he said.

It wasn't a trait unique to Barboza, Partington said.

'One hit man I knew would buy his daughter a toy after every hit. She had a lot of toys.'

When he testified before a congressional committee, Barboza was asked why he disposed of his victims with different weapons -- knives, icepicks, a sashweight -- instead of just shooting them.

'You don't wear the same suit to work every day, do you?' Barboza told a congressman.

Partington and his men were more than bodyguards to Barboza. They kept his mind and body active and gained his confidence.

Barboza was proud of his fists, so Partington set up a gym with a punching bag. A ranked fighter was brought in to spar with Barboza. At Halloween, marshals donned masks for Barboza's daughter.

Barboza proved himself worth the trouble. His testimony in 1968 helped the government convict Patriarca on murder-conspiracy charges. He was sentenced to 10 years in prison.

'That was where the program was really tested -- against Patriarca. If that didn't work, we wouldn't have a program,' Partington said.

Then it was time for Barboza to leave the witness program. It was a prophetic parting for the two men.

Before Barboza hopped on a plane for San Francisco, he pulled a cigarette from his mouth and sneered, 'You haven't changed me a damn bit, Partington.'

'When that plane took off -- phew, it was like a mountain was lifted off my shoulders,' Partington said.

A new name -- Baron -- and a job as a cook awaited Barboza and his family on the West Coast.

He soon returned to his old ways. On Feb. 10, 1976, two men in a van pulled up alongside Barboza on a quiet residential street in San Francisco and gunned him down. He was 42.

'If he was here today, he'd say it was a good hit,' Partington said.

Partington's job has brought him in touch with every major mob figure in the Northeast, but Barboza holds a special place. The program's future hinged on how well Barboza performed on the witness stand.

Some 4,000 other witnesses and their families followed Barboza's example. The government's only promise: 'We'll keep you alive and we'll keep you basically content. That's all,' Partington said.

There was some selling, too.

'We have to show them we're the good guys, we wear the white hats. These are street people -- they're not Billy Grahams. They test you,' Partington said.

Some of those witnesses have resurfaced to criticize the program's relocation efforts. There are problems in relocating a street-wise hood that a new name and cosmetic changes like a beard and glasses won't overcome, Partington admits.

Placed in a rural environment, the witness stands out; but back in the city, he's liable to stray back into his old habits.

'They figure they came forward for the government as a star witness and the government owes them,' Partington said. 'You just can't leave them out there alone.'

'We learned day by day. We've learned by our mistakes,' Partington said. He still believes the program is the most effective way to slice through the tentacles of organized crime.

'I think the scorecard is definitely in favor of the government,' he said.

Professionally, the job was rewarding.

'I've touched upon every layer of it -- the police, the mob, their families. I've got to be one of the luckiest cops in Rhode Island.'

But 11 years of rooming with mobsters and criss-crossing the country with stoolies prompted him to reflect on his life, which includes a wife and 22-year-old son.

'What are these people to me? What am I doing here?' he'd asked himself during long separations from his family.

'What are you living with me for? It's Thanksgiving. You should be with your family,' Barboza said.

Many witnesses who went through the program still correspond with Partington. He passes on the latest bit of information about a son or daughter of a former witness.

'It was a good feeling knowing that you could mold someone's life -- and we did. The rewards were seeing people get back on the straight way. It sounds corny, but it's not.'

Odd News // 19 hours ago
Turkey crashes through window into Virginia home
Sept. 24 (UPI) -- Deputies and animal services officers in Virginia responded to a resident's home where a turkey crashed through a window and barricaded itself inside the bathroom.

Odd News // 19 hours ago
Watch: Man reunited with hurricane-blown photo of late wife
Sept. 24 (UPI) -- An Alabama man whose beloved photo of his late wife was swept out of his vehicle by winds from Hurricane Sally was reunited with the picture thanks to some strangers and social media. 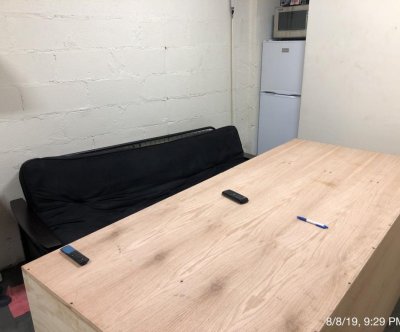 Odd News // 21 hours ago
New York MTA workers had secret 'man cave' under subway tracks
Sept. 24 (UPI) -- Investigators with New York's Metropolitan Transportation Authority said a group of employees were found to have maintained an illegal "man cave" in a storage room beneath the subway tracks.