Actor-comedian Chevy Chase has been granted a divorce and...

LOS ANGELES -- Actor-comedian Chevy Chase has been granted a divorce and must pay his ex-wife, actress-model Jacqueline Carlin Chase, a $400,000 settlement.

The couple were married in December 1976 and she sued for divorce in April 1978. They reconciled for several months, but later decided to go ahead with th divorce. 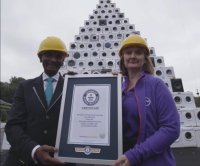