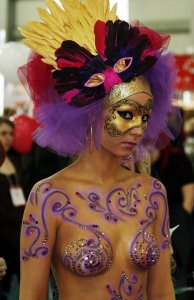 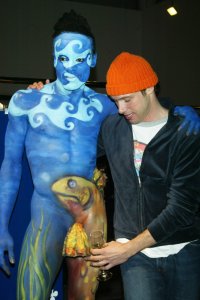 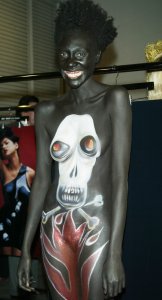 Odd News // 1 year ago
Ireland man seeks Guinness record for his 34 'Yu-Gi-Oh' tattoos
An Irish man is applying for a Guinness World Record after getting 34 different tattoos based on anime series and collectible card game "Yu-Gi-Oh."

Entertainment News // 1 year ago
Cardi B shows off huge, floral back tattoo
Cardi B shared on Instagram this weekend a photo of a colorful new tattoo that goes from the base of her neck, down her back to her buttocks and thigh.

U.S. News // 2 years ago
Oklahoma to gradually reopen businesses from Friday
Oklahoma Gov. Kevin Stitt has announced the state will begin to ease staunch measures implemented to curb the spread of the coronavirus from Friday with aims to reopen its economy by June.

Entertainment News // 4 years ago
Dwayne Johnson shares photo of his new bull tattoo
Dwayne "The Rock" Johnson has shared on Instagram a photo of his latest body art, an intricate design on his right arm that covers his previous bull tattoo.

Body art is art made on, with, or consisting of, the human body. The most common forms of body art are tattoos and body piercings, but other types include scarification, branding, scalpelling, shaping (for example tight-lacing of corsets), full body tattoo and body painting.

More extreme body art can involve things such as mutilation or pushing the body to its physical limits. For example, one of Marina Abramovic's works involved dancing until she collapsed from exhaustion, while one of Dennis Oppenheim's better-known works saw him lying in the sunlight with a book on his chest, until his skin, excluding that covered by the book, was badly sunburned. It can even consist of the arrangement and dissection of preserved bodies in an artistic fashion, as in the case of the plastinated bodies used in the travelling Body Worlds exhibit.

Body art is also a sub-category of performance art, in which artists use or abuse their own body to make their particular statements.

FULL ARTICLE AT WIKIPEDIA.ORG
This article is licensed under the GNU Free Documentation License.
It uses material from the Wikipedia article "Body Art."