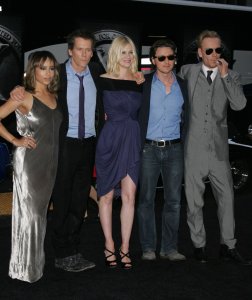 TV // 4 months ago
'The Batman' spinoff series ordered by HBO Max
HBO Max has given a series commitment to a spinoff of Matt Reeves' upcoming DC Comics film, "The Batman."

Movies // 7 months ago
'The Batman' pushed back to October 2021
"The Batman," starring Robert Pattinson as the Caped Crusader, has been delayed until Oct. 1 2021, Warner Bros. has announced.

Entertainment News // 8 months ago
Elton John postpones tour dates, 'The Witcher' halts production
Elton John announced on Monday that he is postponing a number of concert dates in the U.S. amid COVID-19 concerns.

Entertainment News // 8 months ago
Razzies canceled, more filming projects shut down amid COVID-19 concerns
The 40th annual Razzie Awards ceremony recognizing the worst in cinema was canceled, and dozens of TV and film productions were shut down this weekend.

Zoë Isabella Kravitz (born December 1, 1988)[1][2] is an American actress, singer and model. She is the daughter of musician Lenny Kravitz and actress Lisa Bonet. She has appeared in the films No Reservations (2007), The Brave One (2007), and as Angel Salvadore in the superhero film X-Men: First Class (2011). Kravitz played Pearl on season four of the Showtime television series Californication, and co-starred in After Earth, with Will and Jaden Smith, directed by M. Night Shyamalan. She is also well-known for her role as Christina in the sci-fi dystopian franchise, The Divergent Series.

FULL ARTICLE AT WIKIPEDIA.ORG
This article is licensed under the GNU Free Documentation License.
It uses material from the Wikipedia article "Zoe Kravitz."
Back to Article
/