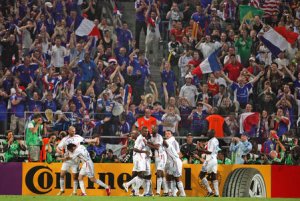 He said some very harsh words, which he repeated several times

Zinedine Yazid Zidane (French pronunciation: ; born 23 June 1972) is a retired French World Cup-winning footballer. Widely regarded as one of the game's all-time greats, Zidane played for club teams in France, Italy and Spain, and was a member of the French national team. His career accomplishments include helping France win the 1998 World Cup and Euro 2000, in addition to winning the 2002 UEFA Champions League with Real Madrid. One of only two three-time FIFA World Player of the Year winners along with Ronaldo, Zidane was also named the European Footballer of the Year in 1998. He retired from professional football after being ejected from the 2006 World Cup (in the final) for headbutting Italy's Marco Materazzi after the latter was alleged to have made highly-offensive comments about Zidane's family.

Zidane joined the junior team of US Saint-Henri, a local club in the La Castellane district of Marseille. At the age of 14, he participated in the first-year junior selection for the league championship, where he caught the attention of AS Cannes scout Jean Varraud. He went to Cannes for a six-week stay, but ended up remaining at the club for four years to play at the professional level. Zidane played his first Ligue 1 match at seventeen, and scored his first goal on 8 February 1991, for which he received a car as a gift from the team president. His first season with Cannes culminated in a UEFA Cup berth.

Zidane was transferred to Girondins de Bordeaux for €7 million in the 1992–93 season, winning the 1995 Intertoto Cup and finishing runner-up in the 1995–96 UEFA Cup in four years with the club. He played a set of midfield combinations with Bixente Lizarazu and Christophe Dugarry, which would become the trademark of both Bordeaux and the 1998 French national team. In 1995, Blackburn Rovers coach Ray Harford had expressed interest in signing both Zidane and Dugarry, to which team owner Jack Walker reportedly replied, "Why do you want to sign Zidane when we have Tim Sherwood?"

FULL ARTICLE AT WIKIPEDIA.ORG
This article is licensed under the GNU Free Documentation License.
It uses material from the Wikipedia article "Zinedine Zidane."
Back to Article
/