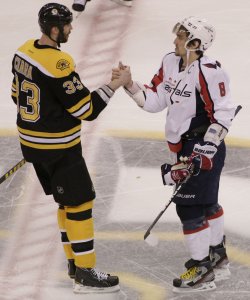 I knew I would have to put a really hard shot

The player had the puck behind the net and I just turned around for a second, looking for a guy in front of the net

That's the best I've seen him play, and it rubs off on everybody

We know this is not over, but we'll try on Friday night to win the series

Zdeno Chára (Slovak pronunciation: ; born March 18, 1977) is a Slovak professional ice hockey defenseman. He is the captain of the Boston Bruins of the National Hockey League (NHL) and won the Norris Trophy while playing for them in 2008–09. At 6 ft 9 (2.06 m), he is the tallest player ever to play in the NHL. He is also the second European born and trained captain to win the Stanley Cup.

Chára was drafted 56th overall by the New York Islanders in the 1996 NHL Entry Draft. After four seasons with the Islanders, he was traded to the Ottawa Senators during the 2001 NHL Entry Draft. Chára was part of a package deal with Bill Muckalt and the second overall pick in that year's draft (Jason Spezza) that sent Alexei Yashin to New York.

As a Senator for four years, Chára emerged as an elite defenseman in the league and more than doubled his previous offensive totals in his first season with Ottawa. In his second season with the team, 2002–03, Chára made his first All-Star Game appearance and recorded the second hardest shot behind Al MacInnis in the skills competition.

FULL ARTICLE AT WIKIPEDIA.ORG
This article is licensed under the GNU Free Documentation License.
It uses material from the Wikipedia article "Zdeno Chara."
Back to Article
/