Top News // 4 years ago
The Almanac
On Oct. 13, 1926, Jesse L. Brown, the first African-American aviator in the U.S. Navy, and a recipient of the Distinguished Flying Cross, was born in Hattiesburg, Miss. 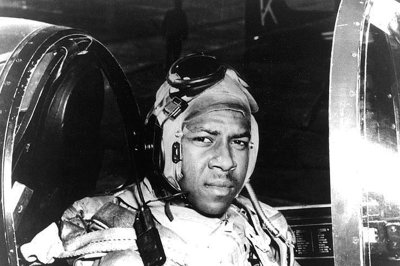 Montand was born Ivo Livi in Monsummano Terme, Italy, the son of poor peasants Giuseppina (née Simoni) and Giovanni Livi, a broommaker. Montand's mother was a devout Catholic, while his father held strong Communist beliefs. Because of the Fascist regime in Italy, Montand's family left for France in 1923. He grew up in Marseille, where, as a young man, he worked in his sister's barber shop, and later on the docks. He began a career in show business as a music-hall singer. In 1944, he was discovered by Édith Piaf in Paris and she made him part of her act, becoming his mentor and lover.

Montand went on to international recognition as a singer and actor, starring in numerous films. His recognizably crooner songs, especially those about Paris, became instant classics.

FULL ARTICLE AT WIKIPEDIA.ORG
This article is licensed under the GNU Free Documentation License.
It uses material from the Wikipedia article "Yves Montand."
Back to Article
/