U.S. News // 1 year ago
Burger King parent company unveils global growth strategy
The parent company of Burger King, Popeyes Louisiana Kitchen and Tim Hortons said Wednesday it will increase its global locations by 55 percent in an effort to become one of the world's largest restaurant firms.

Business News // 3 years ago
McDonald's to sell controlling stake in China operations for $1.7B
McDonald's announced it plans to sell its controlling interest in its business in mainland China and Hong Kong for $1.67 billion. 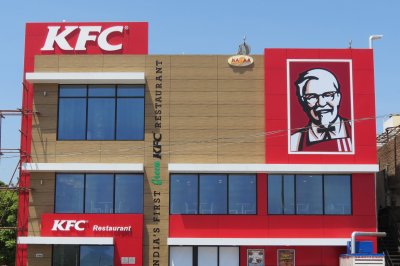 Yum! Brands, Inc. (NYSE: YUM) or Yum! is a Fortune 500 corporation, that operates or licenses Taco Bell, KFC, Pizza Hut, Wingstreet, and Long John Silver's restaurants worldwide, and A&W Restaurants (excluding A&W in Canada). Based in Louisville, Kentucky, it is the world's largest fast food restaurant company in terms of system units—over 36,000 restaurants around the world in more than 110 countries and territories. In 2008, Yum!'s global sales totaled more than US$11 billion.

Yum! was created on October 7, 1997, as Tricon Global Restaurants, Inc. an independent company, as a result of a spin-off from PepsiCo, which owned and franchised the KFC, Pizza Hut and Taco Bell brands worldwide. Because of the company's previous relationship with Pepsi, Yum! Brands has a lifetime contract with PepsiCo, with notable exceptions being the contract of A&W Restaurants with Dr Pepper Snapple Group to be the exclusive restaurant provider of A&W Root Beer, and the contracts of franchisees such as HMSHost and college-operated locations with Coca-Cola which override Yum's lifetime PepsiCo contract.

Yum! president David C. Novak is a director of J.P. Morgan Chase and became chief executive officer of Yum! Brands on January 1, 2000 and chairman of the board on January 1, 2001; he is also a member of the Yum! executive/finance committee.

FULL ARTICLE AT WIKIPEDIA.ORG
This article is licensed under the GNU Free Documentation License.
It uses material from the Wikipedia article "Yum Brands."
Back to Article
/