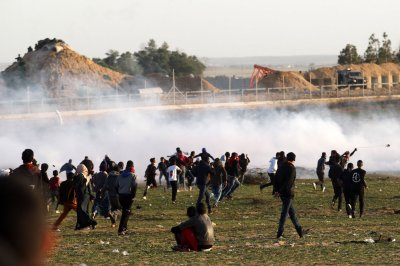 World News // 2 years ago
Israeli-European summit canceled after Holocaust remarks about Poland
A five-nation conference between Israel and four central European countries was called off Monday after Poland withdrew over comments about the Holocaust.

World News // 2 years ago
Hamas engineer assassinated in Malaysia
Hamas announced Saturday one of its members, a Palestinian engineer, was assassinated at the entrance to a mosque in the capital of Malaysia, Kuala Lumpur.

World News // 3 years ago
Israel says it was behind 2007 airstrike on Syrian nuclear facility
For the first time, Israel said Wednesday it was behind a 2007 airstrike on a Syria nuclear facility -- a disclosure aimed at sending a message to Iran.
World News // 6 years ago
FAA extends ban on American carriers' travel to Israel
The FAA announced Wednesday an extended travel ban on U.S. carriers flying to and from Tel Aviv's Ben Gurion International Airport for 24 more hours.
World News // 6 years ago
In response to FAA travel ban on Tel Aviv airport, Israel reopens southern airport
Israel announced Wednesday it would reopen an old airport in the south of the country in response to FAA concern about the safety of Ben Gurion in Tel Aviv.
World News // 7 years ago
Israeli minister attacks PA official who called Sharon 'war criminal'
An Israeli minister slammed a senior Palestinian Authority official Monday for calling the late Prime Minister Ariel Sharon a war criminal.
World News // 7 years ago
Israel calls to release Pollard from U.S. prison
Israeli officials Sunday called for the release of jailed Israeli-American spy Jonathan Pollard amid reports the Washington spied on Israel, officials said.

The prime minister's statement carries good news to Israel's security. It is a message to the United States, the region's countries and the rest of the world

This message is undoubtedly very significant, on the eve of the prime minister's visit to the White House

The platform of the Palestinian unity government, agreed to by Abbas, calls for the continuation of the armed struggle against Israel until the end of the occupation and until the implementation of the Right of Return, whose real meaning is the annihilation of the State of Israel

The refusal to acknowledge Israel as a Jewish state, the demand for a withdrawal to the 1967 lines and for the full right of return for Palestinian refugees -- this means wiping Israel out of existence

Yisrael Katz (Hebrew: ישראל כץ‎, born 21 September 1955) is an Israeli politician who currently serves as a member of the Knesset for Likud and as the country's Minister of Transportation.

Born in Ashkelon, Katz earned a BA and an MA at the Hebrew University of Jerusalem.

He won thirty-fourth place on the Likud-Gesher-Tzomet list for the 1996 elections, but missed out on a place in the Knesset when the alliance won only 32 seats. However, he entered the Knesset in November 1998 as a replacement for Ehud Olmert. He was re-elected in 1999 and 2003, and was appointed Minister of Agriculture in Ariel Sharon's government in 2003. Katz left the cabinet in January 2006 after the Likud-Kadima split, and was re-elected in the 2006 elections.

FULL ARTICLE AT WIKIPEDIA.ORG
This article is licensed under the GNU Free Documentation License.
It uses material from the Wikipedia article "Yisrael Katz."
Back to Article
/