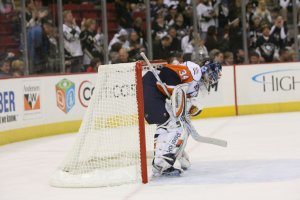 Yann Danis (born June 21, 1981 in Saint-Jérôme, Quebec) is a professional ice hockey goaltender for the New Jersey Devils of the National Hockey League.

Born the only child to Yves Danis and Ginette Boucher, Yann Danis grew up in Saint-Jérôme and attended École Secondaire St-Joseph. Danis spent 1998–1999 with the Cornwall Colts Junior "A" Team, while also going to the St. Joseph School. As the netminder for the Colts, he finished with the best goals against average both in the regular season and in the playoffs. He was also named to the Rookie All-Star Team and to the Academic All-Star Team. Danis helped his team to finish as regular season and playoff champions of the Central Junior "A" Hockey League. He led that same team to go on to win the Fred Page Cup as the Eastern Canadian Champions, finishing in fourth place overall in Canada Junior "A" Hockey. During the 1997–1998 season, he was named to the 17-year old all-star team with the Quebec Junior "AAA" Hockey League. He also played two years, 1995–1997, with Polyvalente of St. Jerome and one year, 1994–1995, with Cap Jeunesse and played a year St.Mairie Deavulix during the 1993-1994 season.

After receiving six scholarship offers to play hockey, Danis settled on Brown, determined to make education more important than his career. In a breakthrough 2003–04 campaign playing for the Bears of Brown University, the netminder from St. Jerome, QC, posted a 15–11–4 record along with a 1.81 GAA and .942 save percentage that ranked third and second in the nation, respectively. On the strength of those numbers and a season that helped lead Brown to its best ECAC finish since 1995, Danis ended the year under a shower of accolades, earning First Team Jofa All-American honors, INCH.com First Team All-America honors, All-USCHO First Team honors, New England Hockey Writers Association All-Star honors, and First Team All-ECAC and First Team All-Ivy honors. In addition, he was named the 2004 ECAC Player and Goaltender of the Year, the USCHO Defensive Player of the Year, and the Ivy League Player of the Year. He also took home the Leonard Fowle Award as the MVP of New England, as voted on by the New England Hockey Writers Association. As his team rolled through the season, Danis set ECAC records for single-season save percentage and career shutouts (13), and tied Kevin McCabe ('77) for the most career wins by a Bears goaltender with 43.

FULL ARTICLE AT WIKIPEDIA.ORG
This article is licensed under the GNU Free Documentation License.
It uses material from the Wikipedia article "Yann Danis."
Back to Article
/