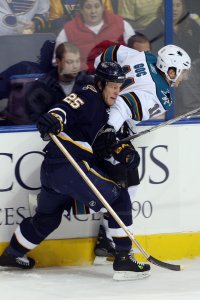 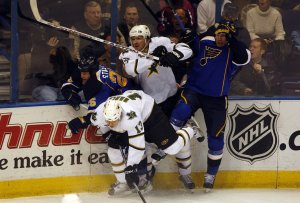 Yan comes from a notable hockey family, and is the son of Hockey Hall of Famer Peter Šťastný (one of the first star Eastern Bloc players to defect to the West). His uncles Anton and Marián Šťastný also played in the NHL, and his brother Paul Stastny plays for the Colorado Avalanche.

Born in Quebec City but growing up mostly in St. Louis, Missouri, Yan Stastny was drafted in the 8th round (259th overall) in the 2002 NHL entry draft. He played for Team USA in the 2005 IIHF World Championships, making the Stastnys the first hockey family known to have represented four different countries in international play (his father having played for Czechoslovakia, Canada in the 1984 Canada Cup as a naturalized citizen, and Slovakia after the Velvet Revolution and Dissolution of Czechoslovakia).

FULL ARTICLE AT WIKIPEDIA.ORG
This article is licensed under the GNU Free Documentation License.
It uses material from the Wikipedia article "Yan Stastny."
Back to Article
/