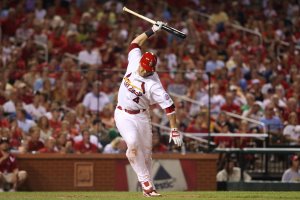 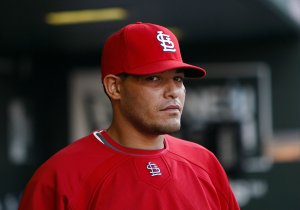 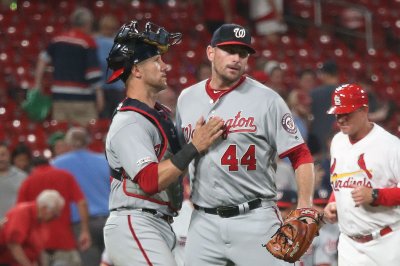 MLB // 8 months ago
Hudson, Kendrick lead Nationals over Cardinals
Pitcher Daniel Hudson recorded a six-out save and Howie Kendrick went 3 for 4 with a homer in a Washington Nationals win against the St. Louis Cardinals.

MLB // 9 months ago
Cardinals continue MLB-best hot streak with sweep of Rockies
The St. Louis Cardinals have won a Major League Baseball best 13 of their last 16 games after completing a four-game sweep of the Colorado Rockies. 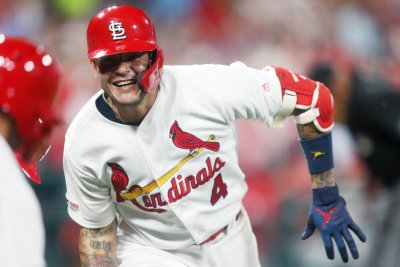 MLB // 1 year ago
Cardinals plate seven runs in one inning versus Brewers
The St. Louis Cardinals exploded for seven runs in the seventh inning of a 13-5 win against the Milwaukee Brewers.

Yadier Benjamin Molina (Spanish pronunciation: ; born July 13, 1982) is a Major League Baseball catcher who plays for the St. Louis Cardinals. Molina was the third catcher to play in two World Series before age 25, along with Johnny Bench and Yogi Berra. He is considered one of the best defensive catchers in baseball, throwing out 42% of runners attempting a stolen base (2005–2010). He has also led major league catchers in pickoffs (2005–2010) with 36.

Molina was born in Bayamón, Puerto Rico to Gladys Matta and Benjamín Molina. Molina's two older brothers, Bengie and José, are also major league catchers. José, Bengie and Yadier are the only trio of brothers to have each earned World Series rings. Molina makes his home in Vega Alta, Puerto Rico. He lives in Caseyville, Illinois during the baseball season.

Molina made his debut with the Cardinals during their pennant-winning season of 2004, backing up former Gold Glove-winner Mike Matheny. Molina was picked over Matheny to start Game 4 of the 2004 World Series against the Boston Red Sox; during the following offseason, Matheny signed a three-year, $10.5-million contract with the San Francisco Giants, clearing the road for Molina to become a starter for St. Louis.

FULL ARTICLE AT WIKIPEDIA.ORG
This article is licensed under the GNU Free Documentation License.
It uses material from the Wikipedia article "Yadier Molina."
Back to Article
/