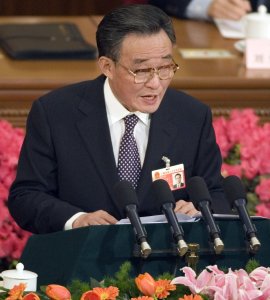 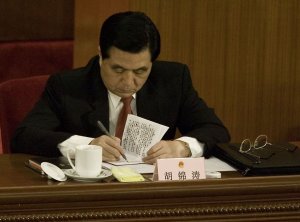 We must draw on the achievements of all cultures, including their political achievements, but we will never simply copy the Western model

Wu Bangguo (simplified Chinese: 吴邦国; traditional Chinese: 吳邦國; pinyin: Wú Bāngguó; born July 1941 in Feidong County, Anhui) is a high-ranking politician in the People's Republic of China. He is currently Chairman of the Standing Committee of the National People's Congress, a position that makes him China's chief legislator. He is also ranked second in official rankings of state and party leaders according to his qualifications in the Party.

A native of Anhui, Wu is an electric engineer by profession, and rose to national fame through regional work as the party chief of Shanghai and as Vice-Premier of the State Council.

He entered Tsinghua University in 1960, majoring in electron tube engineering at the Department of Radio Electronics, where he graduated in 1967. He subsequently was employed as a worker and technician at Shanghai's No. 3 Electronic Tube Factory, and then deputy chief and chief of the technical section from 1976 to 1978. He would eventually go on to lead the factory as its party secretary. In 1978 he was assigned to become the deputy manager of Shanghai Electronic Elements Company, and between 1979 and 1981 the deputy manager of Shanghai Electron Tube Company. Between 1981 and 1983 he worked as the deputy secretary of Shanghai Meters, Instruments and Telecommunications Bureau.

FULL ARTICLE AT WIKIPEDIA.ORG
This article is licensed under the GNU Free Documentation License.
It uses material from the Wikipedia article "Wu Bangguo."
Back to Article
/