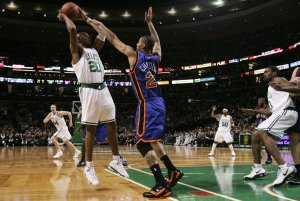 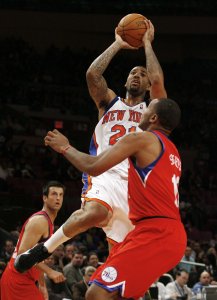 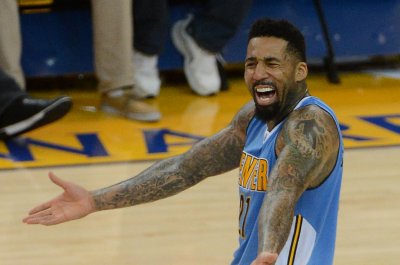 NBA // 2 years ago
Grizzlies acquire Bradley from Clippers
The Memphis Grizzliies acquired shooting guard Avery Bradley from the Los Angeles Clippers for power forward JaMychal Green and guard Garrett Temple on Thursday, the NBA's final day of the season to make a deal.

NBA // 2 years ago
Spurs hope to avoid mistakes vs. 76ers
Gone are the days that San Antonio could produce a mediocre performance and still expect to have its defense carry it to victory.

NBA // 2 years ago
Nuggets have playoff spot in mind facing Lakers
The Denver Nuggets enter their game at the Los Angeles Lakers on Tuesday in a three-way tie for eighth place in the Western Conference with 15 games remaining. NBA // 3 years ago
Confident Thunder look to bounce back at Denver
When Oklahoma City came to Denver on Nov. 9, the team's chemistry was a work in progress. The Thunder were trying to mesh three superstars into a cohesive unit, and at that point it was struggling.

Wilson Chandler (born May 10, 1987 in Benton Harbor, Michigan) is an American basketball player currently with the Denver Nuggets. He played college basketball at DePaul University for two years before declaring for the NBA Draft. Chandler is listed at 6 ft 8 in. and 220 lbs. He plays the forward position. Chandler has exceptional leaping ability, finishes well at the basket, and is improving his mid-range jumper.

Chandler went to Benton Harbor High School in Michigan. He received Michigan All-State mentions as a sophomore and junior, while averaging 22.4 points and 12 rebounds as a junior. He helped the Tigers to a 19–4 record. He was also named to the first team All-State by the Basketball Coaches Association of Michigan. As a senior, he averaged 24 points, 12 rebounds, five assists, and four blocks per game. That year, Chandler and the Tigers went undefeated during the regular season and were ranked #1 in the state. They were beat by eventual state champion, Holt High School, in the regional final. Chandler was named Mr. Basketball of Michigan for 2005.

FULL ARTICLE AT WIKIPEDIA.ORG
This article is licensed under the GNU Free Documentation License.
It uses material from the Wikipedia article "Wilson Chandler."
Back to Article
/