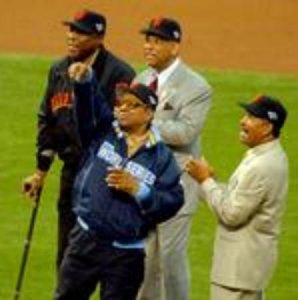 MLB // 3 years ago
San Francisco naming streets after Bonds, Montana, Mays
Barry Bonds might not have a smooth road to Cooperstown, but he'll have his own street in San Francisco.

Sports News // 5 years ago
Texas Rangers beat San Francisco Giants, Madison Bumgarner
ARLINGTON, Texas -- The Texas Rangers did not take the easy way to their longest winning streak at home in more than a month.

Ted helped me a lot when I first started. He gave me a lot of tips on hitting. I met him in Scottsdale during my first spring training with the Giants. He was still with the Red Sox. I used to pick his brain, being a rookie and all, and he was willing to give me advice. I always credit him with helping me. All of his advice turned out to be good for me -- bat selection, weight of bats, everything. He was a student of pitchers. I applied much of what he told me about his theories of hitting and it worked for me. We ended up with the same number of home runs and that means a lot to me

Willie Lee McCovey (born January 10, 1938 in Mobile, Alabama), nicknamed "Big Mac" and "Stretch", is a former Major League Baseball first baseman. He played nineteen seasons for the San Francisco Giants, and three more for the San Diego Padres and Oakland Athletics, between 1959 and 1980. He batted and threw left-handed and was inducted into the Baseball Hall of Fame in 1986.

Prior to playing for the San Francisco Giants, McCovey played for a Giants' farm club in Dallas, Texas that was part of the Class AA Southern League. In that league, he did not participate when his team played in Shreveport, Louisiana due to segregation in that city. He later played for the Pacific Coast League Phoenix Giants just prior to joining the San Francisco Giants.

In his Major League debut on July 30, 1959, McCovey went four-for-four against, hitting two triples and two singles against Hall-of-Famer Robin Roberts en route to a .354 batting average that year, in which he won National League Rookie of the Year honors while playing in just 52 games.

FULL ARTICLE AT WIKIPEDIA.ORG
This article is licensed under the GNU Free Documentation License.
It uses material from the Wikipedia article "Willie McCovey."
Back to Article
/