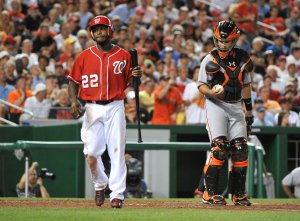 William Charles Harris (born June 22, 1978 in Cairo, Georgia) is a Major League Baseball outfielder and infielder who plays for the New York Mets. Harris is known for his quick feet and base-stealing abilities, with currently 94 career stolen bases. Harris was formerly a member of the Baltimore Orioles (2001), Chicago White Sox (2002-2005), Boston Red Sox (2006), Atlanta Braves (2007), and Washington Nationals (2008-2010). He bats left-handed and throws right-handed. He attended Kennesaw State University and lives in Cairo, Georgia during the offseason. According to Major League Baseball, Willie Harris has a recorded height of 5'9" and weighs 195 pounds.

In the 2005 playoffs, Harris went 2-for-2 in the postseason with an RBI, one stolen base, and one run scored. Harris's successful pinch-hit single in Game 4 of the 2005 World Series against the Houston Astros would prove to be decisive after Harris scored on an RBI single by Jermaine Dye. Not only was the run the game-winner, it was the only run which would be scored in the Series-clinching Game 4.

FULL ARTICLE AT WIKIPEDIA.ORG
This article is licensed under the GNU Free Documentation License.
It uses material from the Wikipedia article "Willie Harris."
Back to Article
/