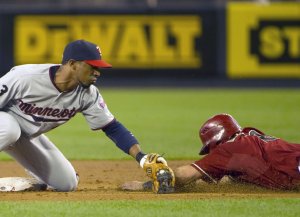 William Paul Bloomquist (born November 27, 1977 in Bremerton, Washington) is a Major League Baseball utility player for the Arizona Diamondbacks. He has played every position, aside from either of the battery positions, during his major league career. He is commonly referred to as the "Silent Assassin" on the ESPN show Baseball Tonight.

At 5'11", 195 pounds, he is a versatile player, but is a limited contributor due to below average offense. He has above-average speed, leading him to be often used in late innings as a pinch runner for slower players. He is used as a defensive specialist, though he does not excel at any given position.

Bloomquist was drafted out of South Kitsap High School in Port Orchard, Washington by the Seattle Mariners in the eighth round (237th overall) of the 1996 amateur draft, but was not signed. He was named ASU On Deck Circle Most Valuable Player; other winners include Dustin Pedroia, Ike Davis, Paul Lo Duca, and Barry Bonds.

FULL ARTICLE AT WIKIPEDIA.ORG
This article is licensed under the GNU Free Documentation License.
It uses material from the Wikipedia article "Willie Bloomquist."
Back to Article
/